Self-Guided Tour of Gardens Around Bath

Bath is situated in the west of England and is a perfect base to explore some of the region’s most beautiful gardens. But before you head out, make sure you leave enough time to enjoy the City itself with its Cathedral, the Pump Room, the Roman Baths and the stunning Palladian terraces immortalised in the books of Jane Austen.

ALWAYS check the garden’s website for opening times before you visit as some can close at short notice. 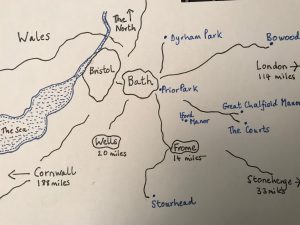 Spend the morning exploring the City on foot and then head out on the Bath Skyline to the first garden of the Tour, Prior Park

As there is no parking at Prior Park, the best way to visit from Bath is by bus or by walking along the Bath Skyline but be prepared for a steep walk down the valley to the magnificent Palladian Bridge and up the other side. The garden is a great example of a landscape created by an eighteenth century entrepreneur, Ralph Allen, and it became a popular destination for many distinguished Whigs including Alexander Pope and William Pitt. Features include the grotto, a cascade, serpentine lake, a Gothic Temple and The Cabinet.

INFORMATION: Prior Park is open every day until the beginning of November and then only at weekends. The gardens are partly accessible by wheelchair with steep slopes, uneven paths and some steps. Dogs are allowed on leads.

It’s time to jump in the car and visit three gardens, all within easy reach of each other.

Iford Manor stands majestically overlooking the River Frome and is only twenty minutes’ drive from Bath. When Harold Peto, garden designer, bought the property in 1899, the house and gardens were derelict but Peto went on to restore the house and create one of the most beautiful terraced gardens in England. There are steep steps throughout the garden so make sure you wear comfortable shoes but it’s well worth the effort with its stunning water features, garden buildings, colonnades, sculpture and beautiful herbaceous borders. Iford is a testament to Peto’s love of Italian, Spanish and Japanese Gardens and it remains almost unchanged today.

INFORMATION: The gardens are open on a Wednesday through Sunday and Bank Holiday Mondays from April to September and only on Sundays in October; it is closed for the rest of the year. Please note that the garden contains many steep and narrow paths and is therefore not suitable for wheelchair users while owners of buggies will be asked to leave them at the ticket desk. Dogs are not allowed. There is café on site.

Traffic permitting, it’s fourteen minutes from Iford Manor to The Courts Garden in Holt. Leave the car in the main car park in the village and walk the final few minutes on foot. From the ticket office, there is a narrow path flanked by pleached limes leading to the front door; the house is not open to the public. From there, turn left and the garden opens up with magnificient herbaceous borders, specimen trees including copper beech, monkey puzzle, catalpa, acers, walnuts and cherries as well as a water garden created from the mill ponds. It’s a fun garden for kids with lots of places to hide.

And if you have time, there’s a wonderful place to eat just down the road from the main car park – the Field Kitchen at the Glove Factory Studios – ‘a place for Outsiders, Adventurers and the Earnest’.

INFORMATION: The garden is open every day except Wednesdays until November when it closes for the winter. Most of the garden is accessible by wheelchair although there are some steps, grass and uneven paths that can be slippery in wet weather. Dogs are not allowed. There is a café on site.

Great Chalfield is just around the corner from The Courts Garden. Although it’s owned by the National Trust the Fuller family still live in the house and they’ll probably be issuing tickets or overseeing the teas. The gardens are a wonderful example of the Arts and Crafts style. They were created by Alfred Parsons, perhaps better known as an artist and illustrator, and include herbaceous borders, a wild flower meadow, fish ponds, orchard and terrace. Make sure you leave time to walk around the house which was described by Pevsner as ‘one of the most perfect examples of the late medieval English manor house’. Also look out for the recently discovered painting of Thomas Tropenell in the dining room; Tropenell bought Great Chalfield in 1443.

INFORMATION: There is no shop although there’s a wonderful teashop in the barn with delicious homemade cakes and scones. The gardens are not open every day so check the website for details. Dogs are not allowed and only part of the garden is accessible by wheelchairs.

Now head back to Bath and put your feet up – it’s about half an hour’s drive.

The next three gardens are vast landscape gardens rather than small, intimate places so to enjoy them at their best, they really need a day each to explore. So if you only have time to visit one, read through the descriptions before deciding – it won’t be an easy decision but whichever you choose, you won’t be disappointed.

Dyrham is the nearest to Bath as it’s only twenty-three minutes away. It can get very busy at weekends so if you choose here, arrive early.

Entering by the main gate, you leave the twenty-first century behind as the drive sweeps down the valley to the magnificent eighteenth century house. But it’s a house of two halves. The first facade was designed by William Talman (think Chatsworth) but the west front is stylistically very different and was created a few years earlier by the Huguenot architect, Samuel Hauduroy. Blathwayt created at Dyrham one of the greatest gardens in England; there were terraces, greenhouses, statues, parterres, canals, stew ponds, a kitchen garden, avenues, ponds, flower gardens, a wilderness, pavilions, mounts and a waterfall. At the bottom of the cataract, there were two thorn trees encircled by pipes, painted green to resemble ivy. When weary guests sat underneath the trees, they were soon soaked by water from the ‘ivy’. Under the ownership of the National Trust, the gardens are being sensitively restored. Dyrham was one of the locations for the TV adaptation of Jane Austen’s final, unfinished novel, Sanditon.

INFORMATION: Dyrham Park is open seven days a week although closed over the Christmas period. The Park covers a huge area so there’s plenty of places to go for a walk and for the kids to run around. The garden has many accessible routes for wheelchair users although the Park is generally unsuitable due to rugged, uneven terrain and steep slopes. Dogs are not allowed. There is a café on site.

Bowood House and Gardens is forty-five minutes’ drive from Bath and is privately owned by the Marquess and Marchioness of Landsdowne. I first visited Bowood as a child and have wonderful memories of riding Conjuror through the woods. Nowadays there’s an adventure playground for older kids, Tractor Ted Little Farm, a soft play area, a Partridge Play Pen as well as the magnificent formal garden and park created by ‘Capability’ Brown. The formal terrace in front of the house was designed by Robert Smirke in the early nineteenth century. The rectangular walled garden is open once a month but tickets have to be bought in advance. The Mausoleum designed by Robert Adam is only open in the Spring when the stunning rhododendron and azalea rides are open to the Public.

INFORMATION: Opening times are complex so check out Bowood’s website before visiting. Most of the garden is accessible by wheelchair although remote areas of the Park is limited as some of the paths are very steep. Dogs are not allowed. There is a café on site.

Stourhead lies to the south of Bath and takes forty-five minutes by car. If you have time, make a detour to the market town of Frome. It’s packed with independent shops and great places to eat – don’t miss Cheap Street just off Market Place which still has a medieval leat or stream running down its centre.

You may have seen photographs and read its history but nothing can prepare you for your first glimpse of the magnificent landscape at Stourhead. I think it’s one of the most beautiful gardens in England and it’s all the creation of one man, Henry Hoare. After Hoare returned from his Grand Tour in 1741, he abandoned the seventeenth century formal garden and laid out this stunning Arcadian landscape.

The circuit walk can be accessed from the house but I prefer entering from near the Spread Eagle Inn. Leaving the Inn, walk between the medieval cross and the cottages and climb the short track to the gate and the National Trust kiosk. From here the path goes to the right and suddenly the landscape opens out with a view across the water of the Pantheon dedicated to Hercules. Henry Flitcroft’s Temple of Flora lies in front of you, shaded by beech, rhododendron and yew. Keeping on the lower circuit, a dark, flint lined passage leads to a dimly lit central chamber where the springs of the Stour flow out, past the statue of the Sleeping Nymph and into a deep plunge pool. On the left is a framed view of the lake which Joseph Spence recorded in 1765 was ‘coverable with a sort of Curtain, when you chuse it’. Hoare and his friends often bathed naked here and on the wall is the recently restored pseudo-classical poem translated by Alexander Pope: Nymph of the Grot these sacred spring I keep; And to the murmur of these water sleep; Ah! spare my slumbers, gently tread the cave; And drink in silence or in silence leave.

Ahead, across an opening is a statue of a bearded god by John Cheere of 1751 who, while pouring water from his pitcher, beckons people back to the lake. After a small Gothic cottage, the circuit leads to the Pantheon or as it was originally called the Temple of Hercules. Higher up and overlooking the lake is the circular Temple of Apollo built by Flitcroft in 1765. In Henry’s day it was a prime tourist attraction and can now be hired for weddings.

INFORMATION: The landscape garden is open for most of the year except over the Christmas period. There are gravel paths with a marked route for wheelchair access although some of the routes are steep in places. Dogs are allowed in the gardens at certain times so check out the National Trust website for details. It can get busy but as the gardens lie at the centre of a 2,650 acre estate, don’t be put off by the number of cars