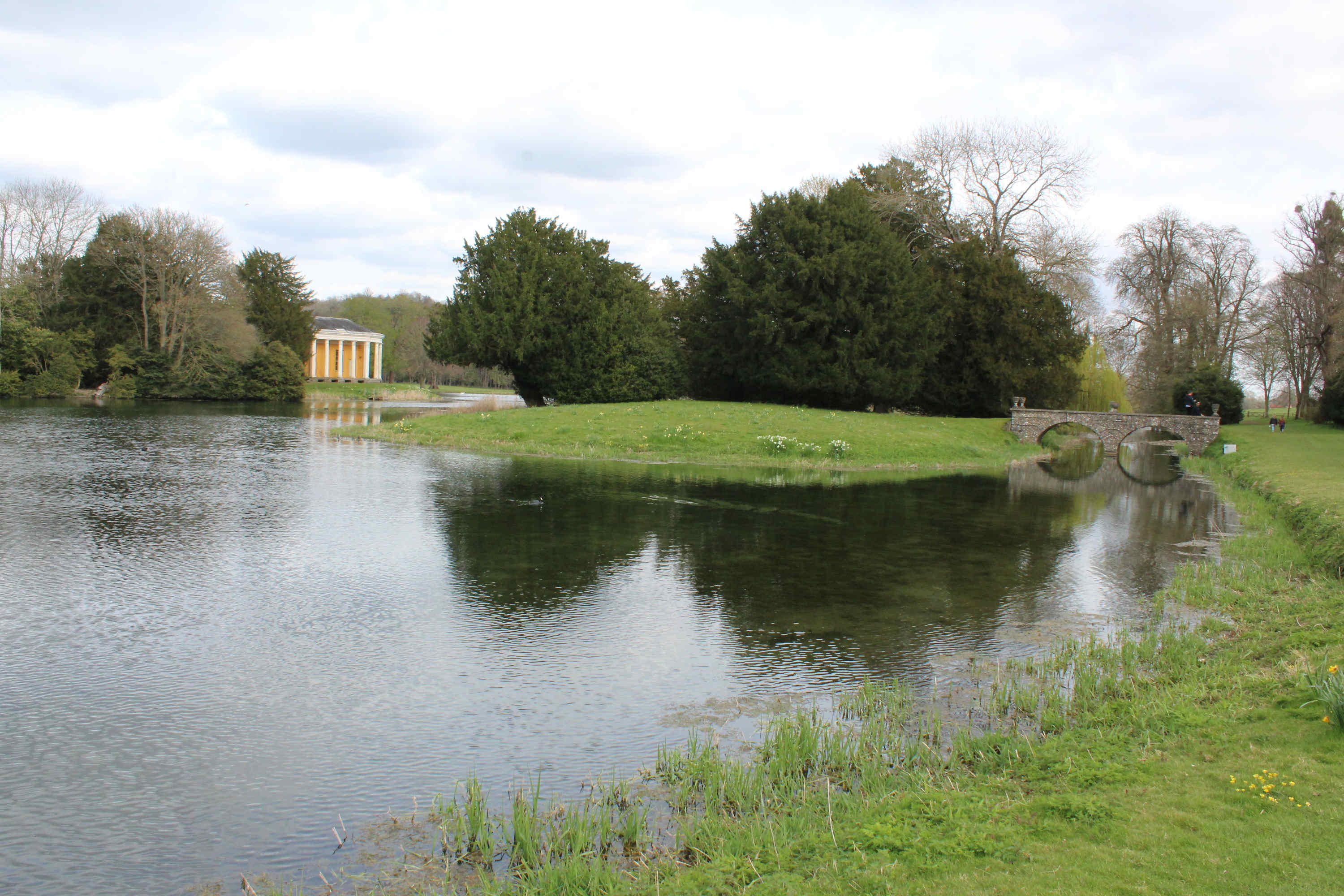 In this blog, I will try and sort the fact from the fiction as well as taking you on a tour of the landscape Sir Francis created at West Wycombe. Many of the garden features have double-meanings so be warned, some of them are of a sexual nature. 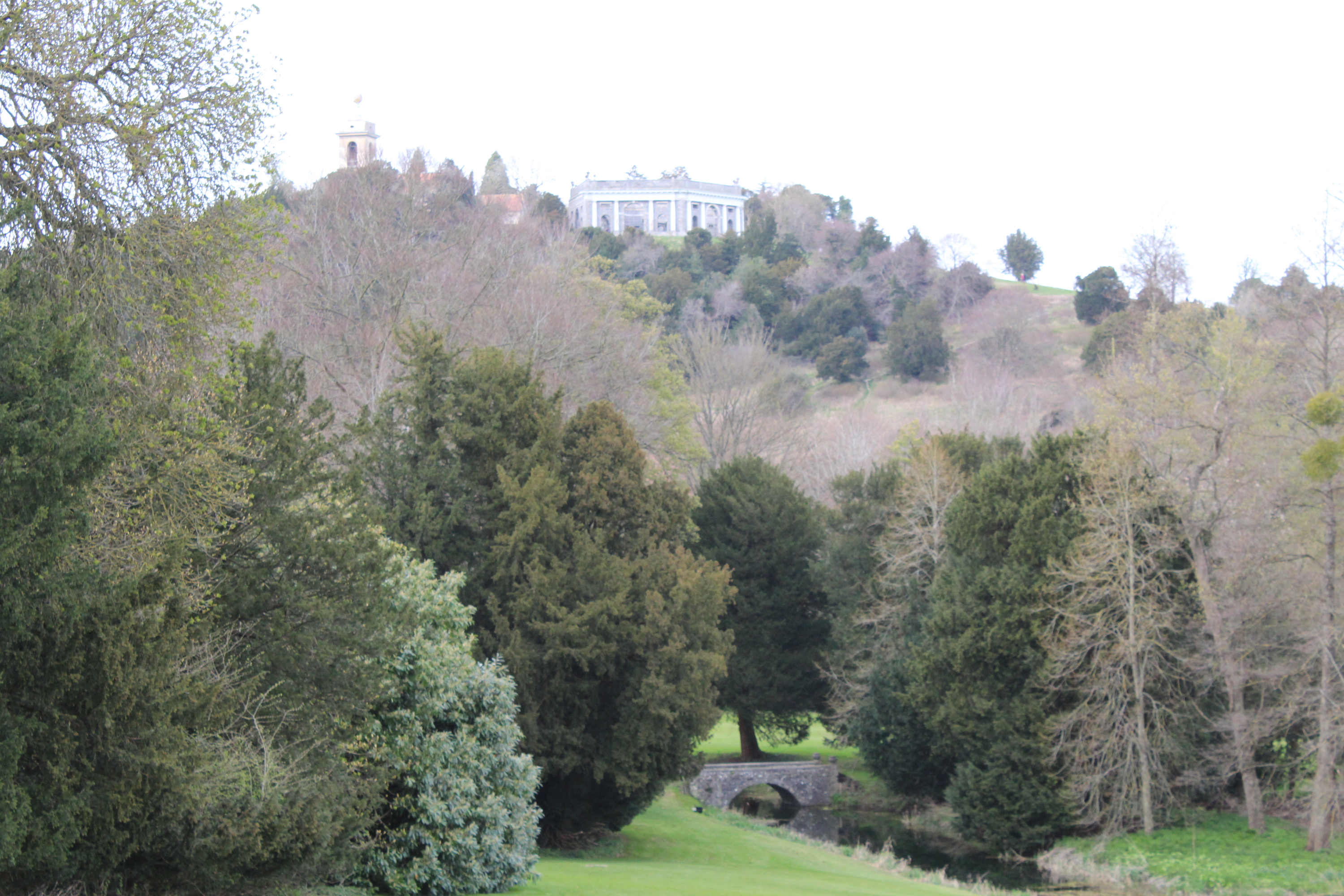 The only child of Sir Francis and Lady Mary Dashwood, Dashwood was brought up under the watchful eye of his uncle, John Fane, later 7th Earl of Westmoreland of Mereworth Castle in Kent. After Eton, Dashwood went on the first of five Grand Tours which included visits to the Baltic, the Ottoman Empire and Russia. Russia was an unusual destination in 1733 and Dashwood kept a diary of his travels. It reveals a sensitive man, interested in the Arts, intrigued by the ‘curiositys’ at Vasiliostoff and appalled by the inhumanity of the clerics. At Peter The Great’s Baroque palace in St Petersburg, Dashwood commented: ‘the house is of no consideration, but the Gardens, that go down to the Sea…there are two handsome Cascades…two houses in the Garden…they are the prittiest things I have seen in these parts, and both, worthy of a place in any Garden in Italy.’

Encouraged by his Uncle, Dashwood built up an extensive library of books on architecture, antiquities and painting. In 1732 for example, he spent over £2700 on books from a bookseller in Amsterdam. Dashwood was extremely sociable and like many of his contemporaries, was a member of numerous all-male clubs including the Society of Antiquaries, the Royal Society, the Lincoln Club, the Egyptian Club, the Divan Club and the Society for the Encouragement of Arts, Manufacturers and Commerce (later the Royal Society of Arts). On his return from Russia, Dashwood became a member of the Society of Dilettanti. Horace Walpole wrote: ‘the nominal qualification [of becoming a member] is having been in Italy and the real one being drunk; the two chiefs are Lord Middlesex and Sir Francis Dashwood, who were seldom sober the whole time they were in Italy’. 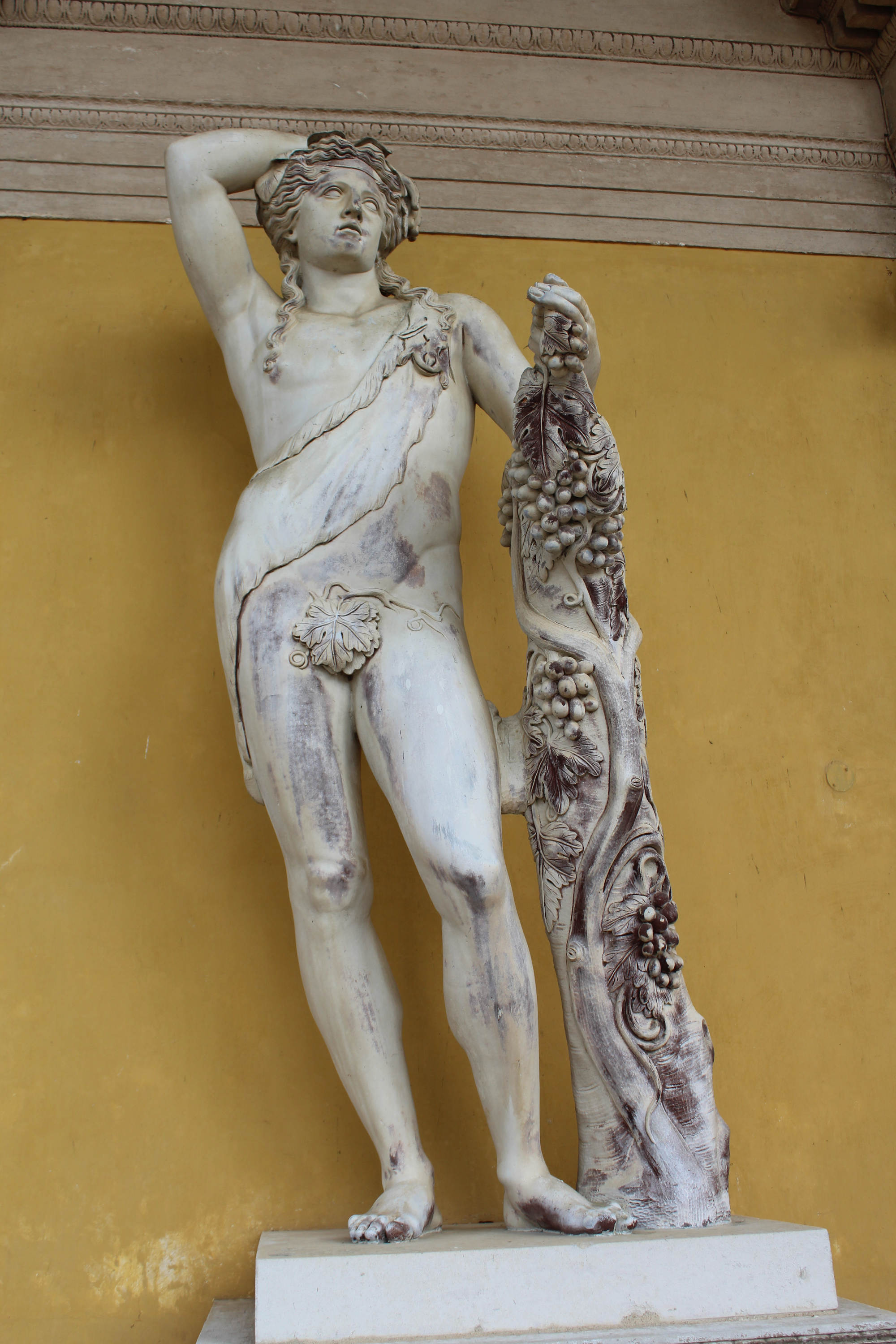 Like many of his contemporaries, Dashwood was appalled at the corruption and hypocrisy within the Catholic Church. On a visit to Italy in 1739, ‘Cavalieri Dashwood’ spent his time singing anti-Papal songs, parodying the newly elected Cardinale Ottoboni and writing licentious poetry. This anti-Catholic display caused a ‘vrai scandalum magnatum’ in Rome but Dashwood took his behaviour one step further – he adopted St Francis as his alter ego. In his portrait by William Hogarth, Dashwood is depicted as St Francis worshipping Venus de Medici whilst reading a pornographic novel. 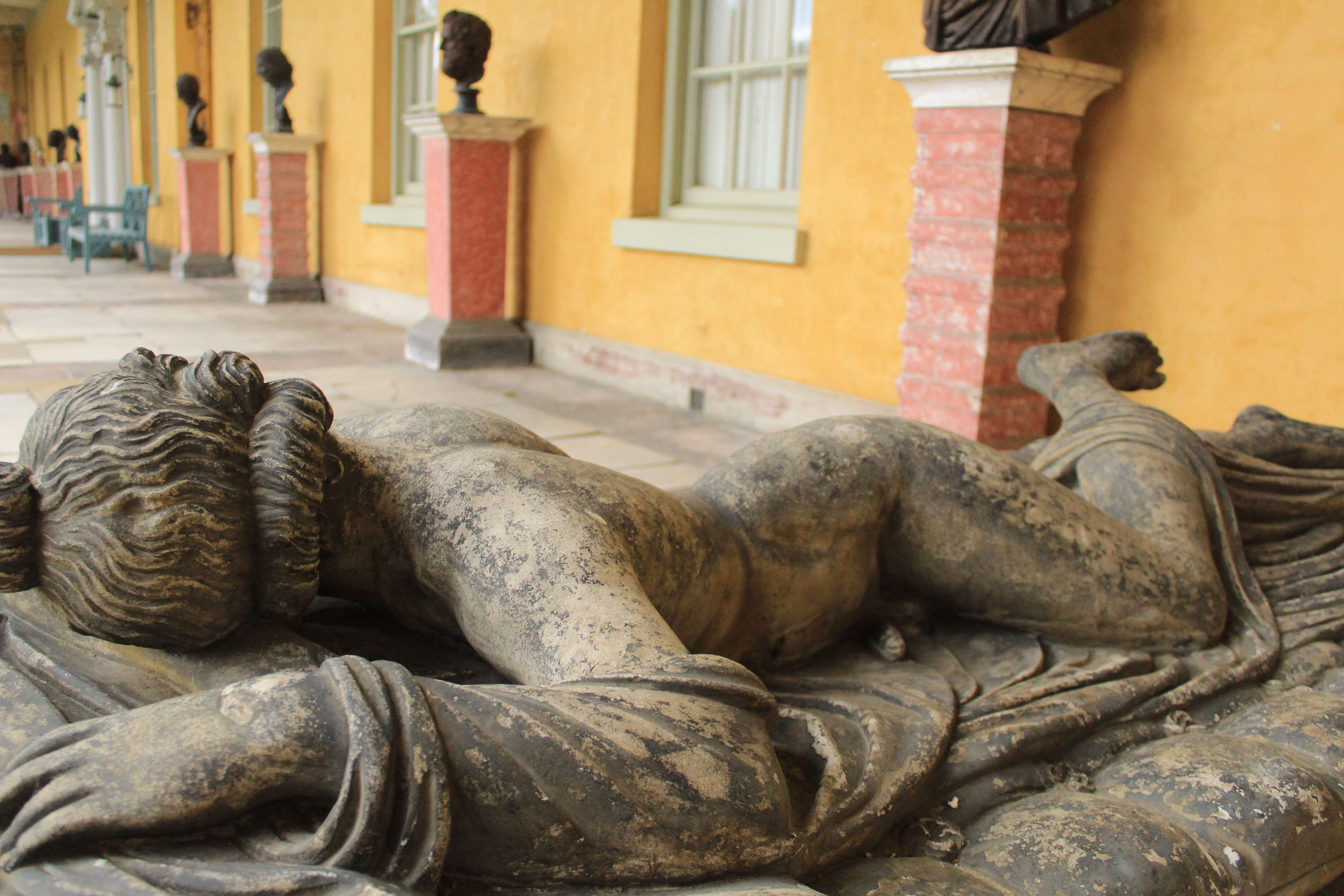 On his return to England in 1740, Dashwood became a member of parliament. A great orator, Dashwood was known for his independence: he supported a Poor Relief Bill, defended Admiral Byng and advocated regulation of the militia. He became Chancellor of the Exchequer under Lord Bute but his attempt at raising revenue through the Cider Tax after the Seven Years War was so unpopular, it caused the downfall of the government.

After Sir Francis’s death in 1781, West Wycombe was inherited by his half-brother Sir John Dashwood-King. The 10th Baronet, Sir John Dashwood, gave the house and grounds to the National Trust in 1943.

Dashwood inherited West Wycombe from his father in 1724 and began laying out the garden in 1730s. 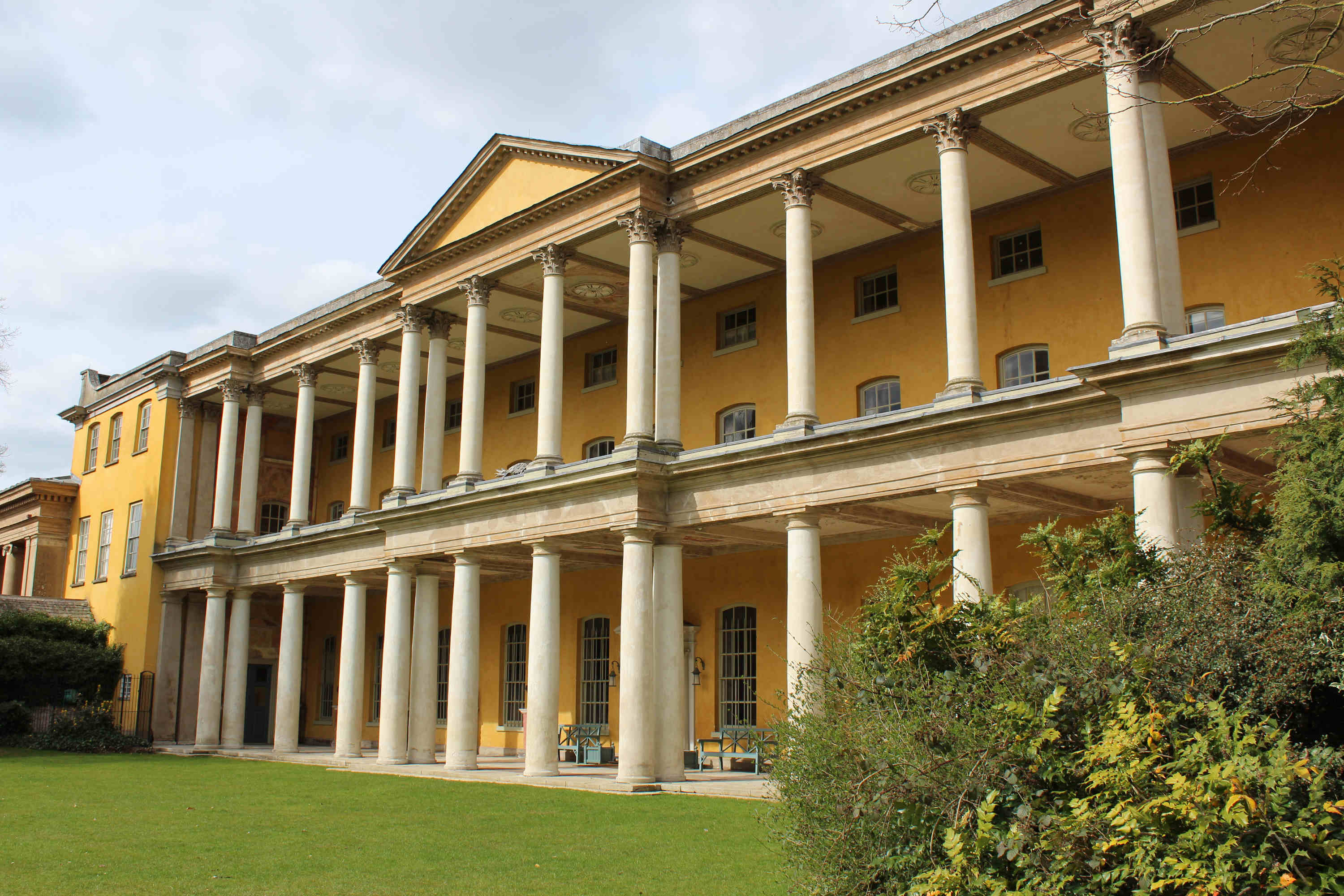 Climb up the hill to the Church of St Lawrence and the Mausoleum but don’t miss the Hell-Fire Caves – these are not owned by the National Trust.

After the crops failed in 1750, Dashwood employed agricultural workers to dig out the ground beneath the Church of St Lawrence. The chalk and flint were used to repave the Oxford Road and to build new structures on the estate and in the village. But the caves took on another purpose when the Friars of St Francis moved their chapter meetings from Medmenham Abbey to here. 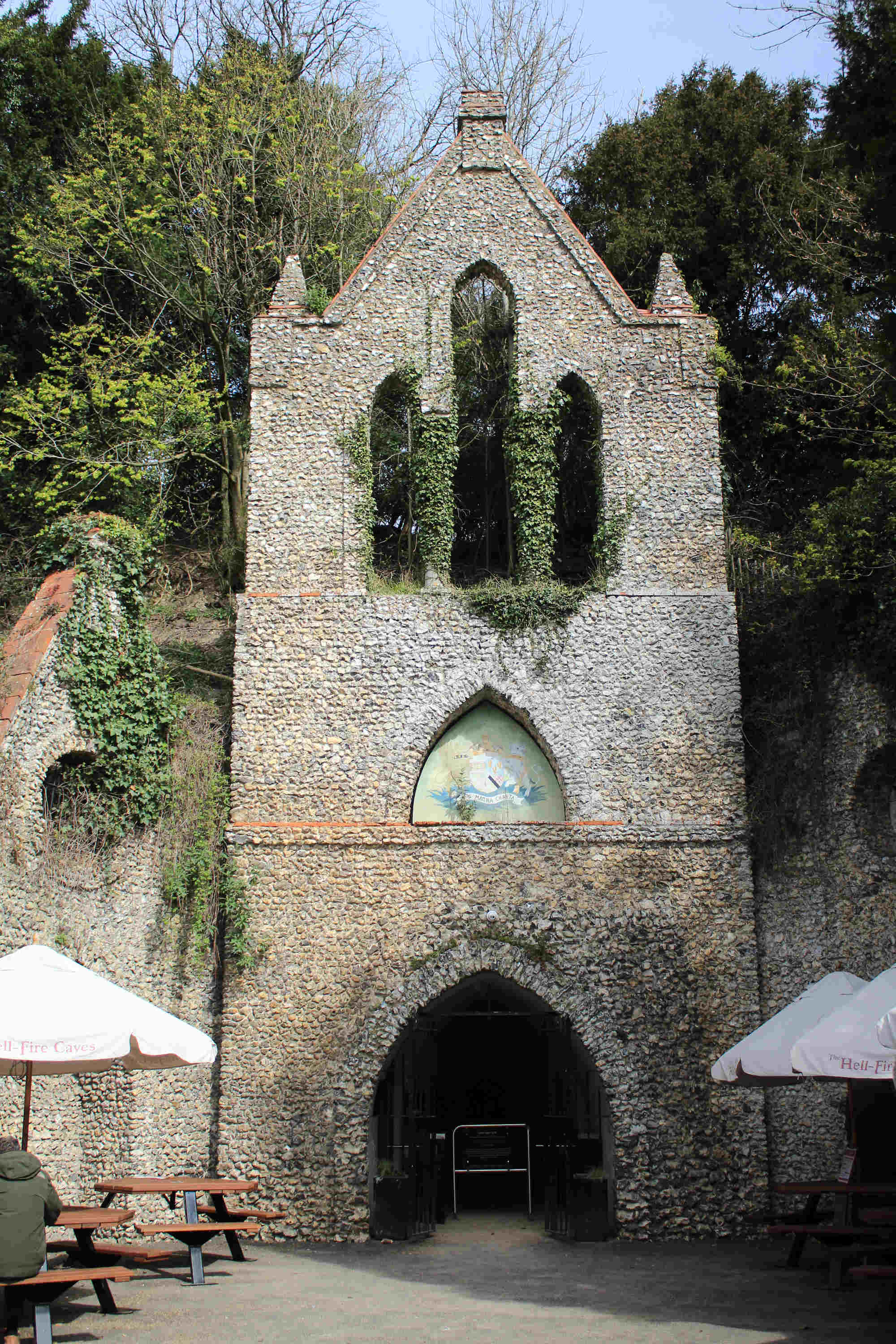 After another series of bad harvests in 1760s, Dashwood once again provided work for local craftsmen. This time, Dashwood arranged for the Church of St Lawrence to be rebuilt with a globe added to the top of the steeple. Described by John Wilkes as ‘the best globe tavern I was ever in’, there was enough room for six. This was typical of Dashwood – combining work for local men whilst creating a secret place to meet his friends. 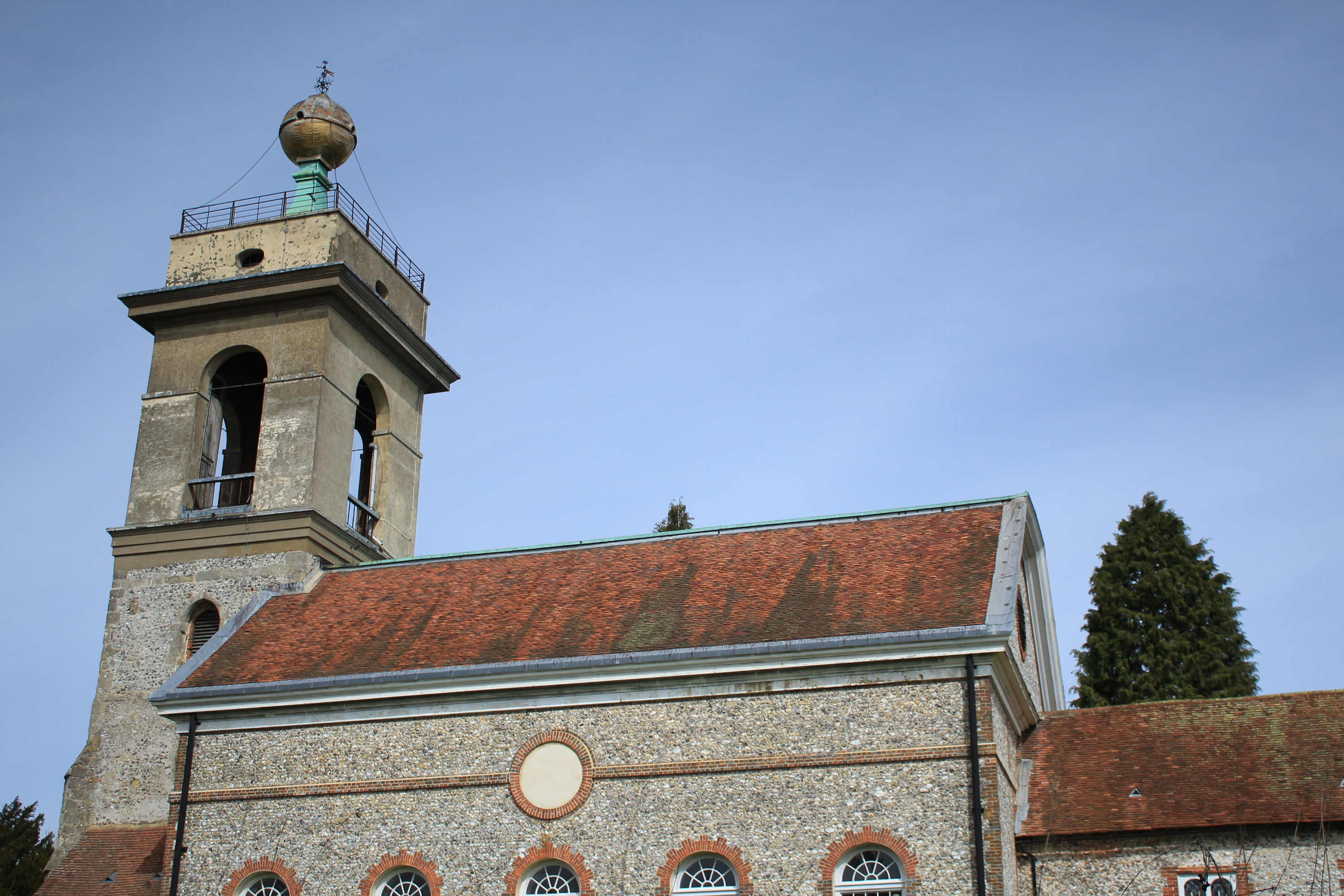 The Mausoleum was designed by Nicholas Revett in 1765 and both Dashwood and his wife are buried here. It also housed the heart of Paul Whitehead which, in accordance with his will, was gifted to Dashwood and placed in an urn on a pedestal. A minor poet, Whitehead was secretary and steward of the Monks of Medmenham and may also have been Dashwood’s lover. In 1829, Whitehead’s heart was stolen from the Mausoleum by a tourist. 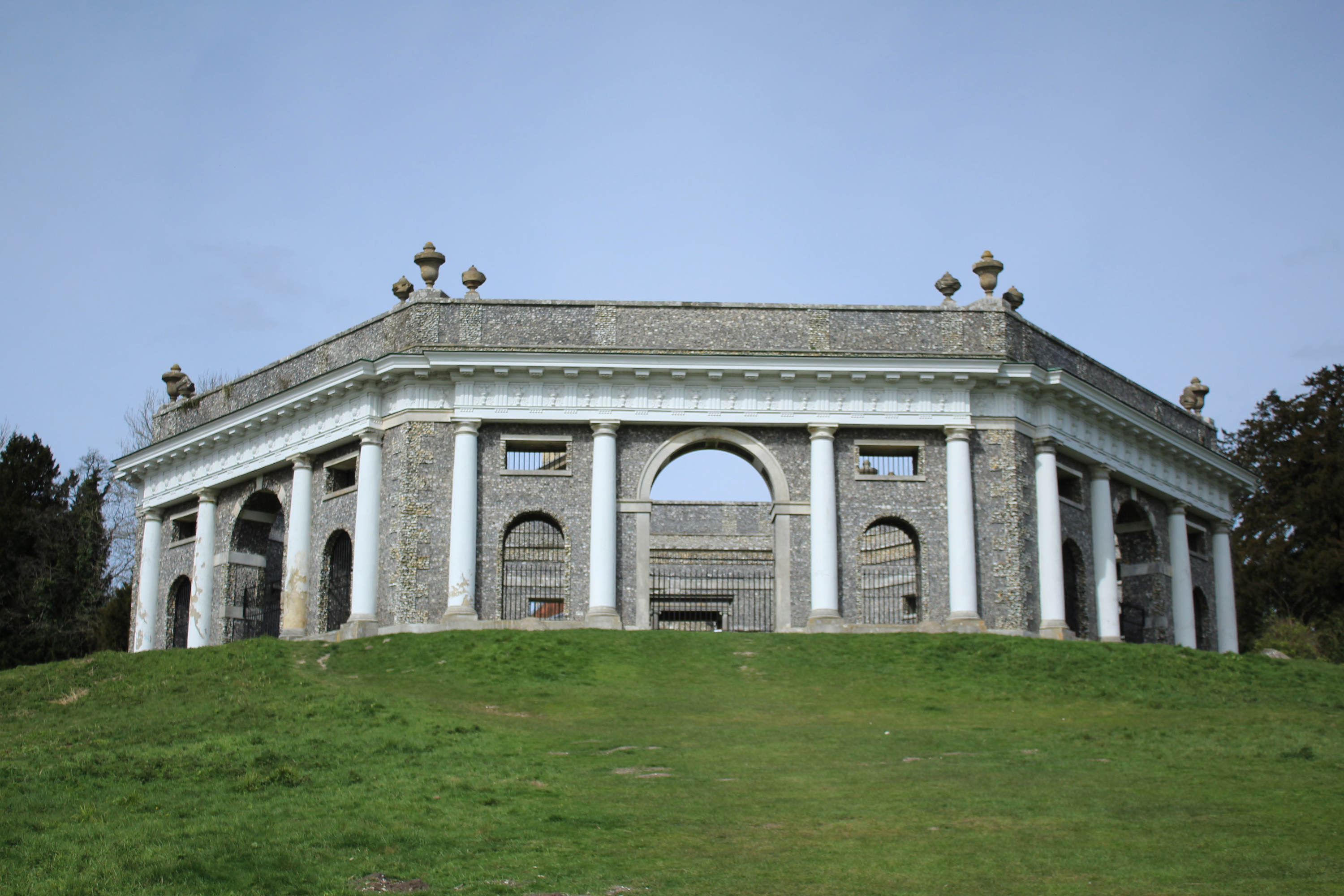 Described by Benjamin Franklin as a ‘paradise’, the garden at West Wycombe is entwined with Dashwood’s character and is full of illusion, eroticism, irony and classical references.

Unlike at Stowe, there is no specific circuit around the pleasure grounds.

Daphne was a nymph pursued by Apollo while Kitty Fisher (mentioned in the nursery rhyme Lucy Locket) was a modern-day celebrity pursued by Dashwood. She was not alone – in the words of Horace Walpole: ‘[Dashwood] had the staying power of a stallion and the impetuosity of a bull’. From the road, these two buildings look similar but from the garden, the illusion is destroyed. The reverse of the Temple is a loggia while the other side of Kitty’s Lodge is a house. 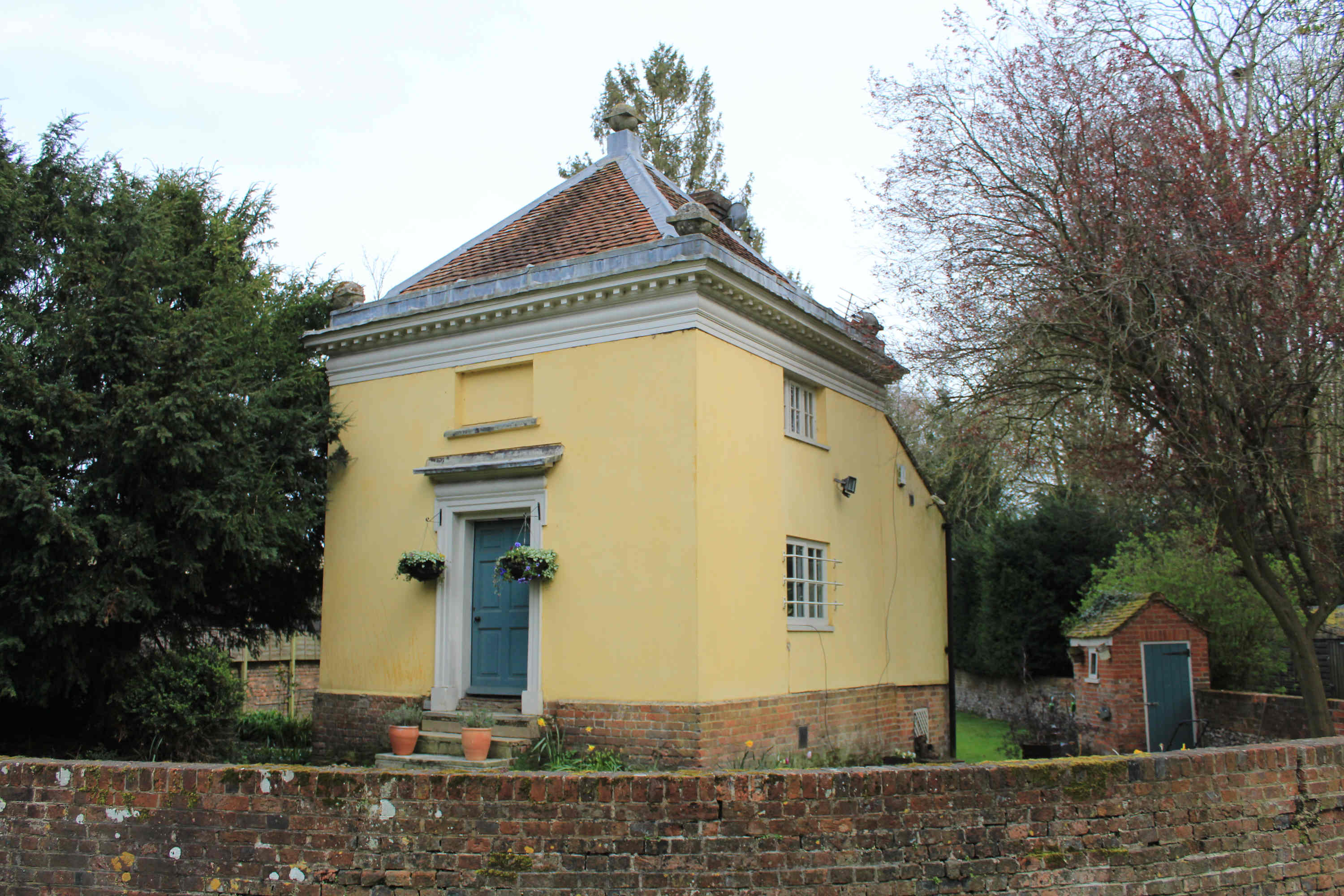 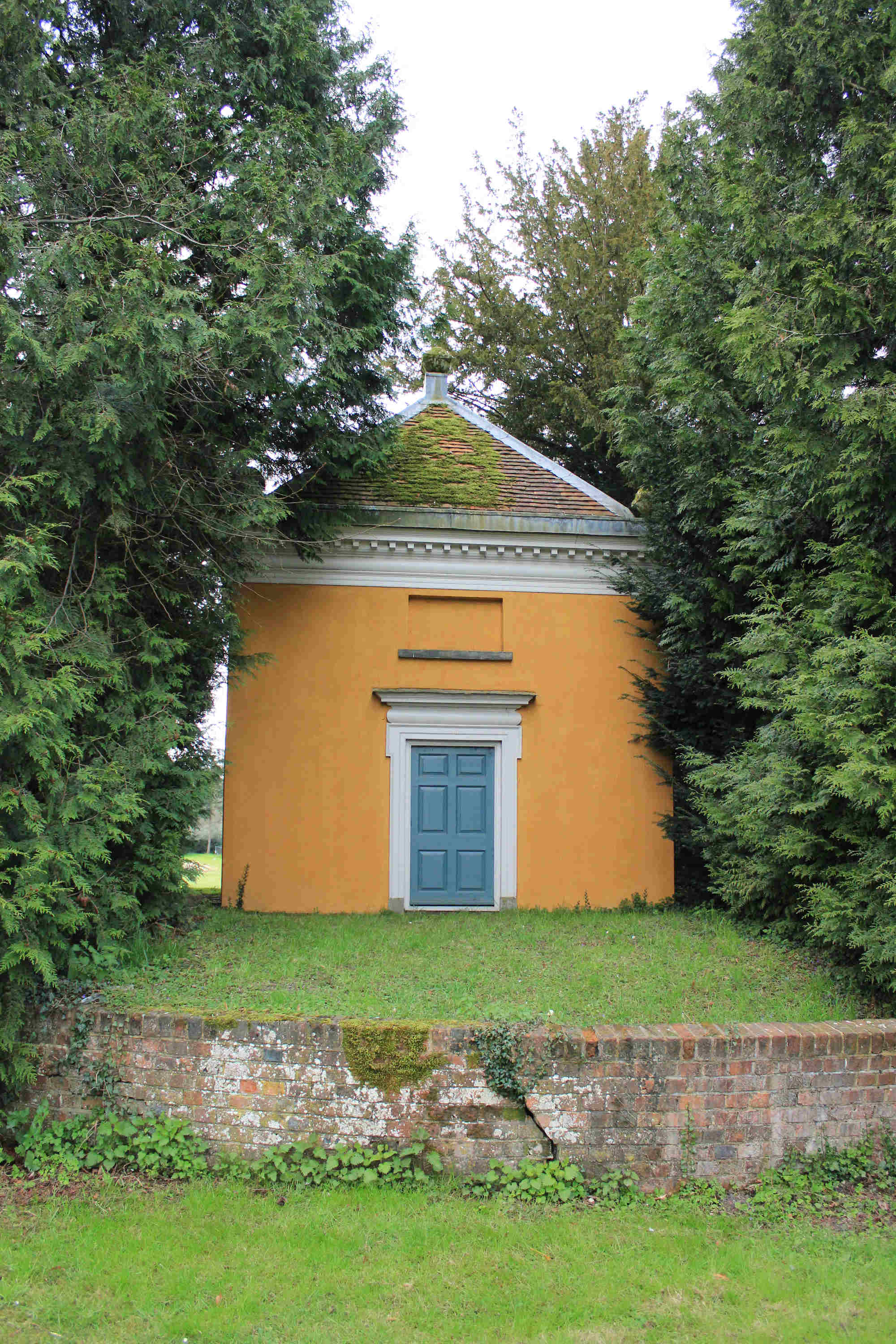 Temple of Venus and Venus’s Parlour

The Temple is built upon the mound of Venus and originally housed a lead statue of the Venus de Medici, patroness of gardens, while beneath the hill is Venus’s Parlour. In the words of John Wilkes, the ‘parlour’ is ‘the same entrance by which we all come into the world and the door is what some idle wits have called the Door of Life’. The building is paired with the entrance to the Caves with the same sexual theme. [The original temple and parlour were demolished in 1819 but rebuilt in 1982.] 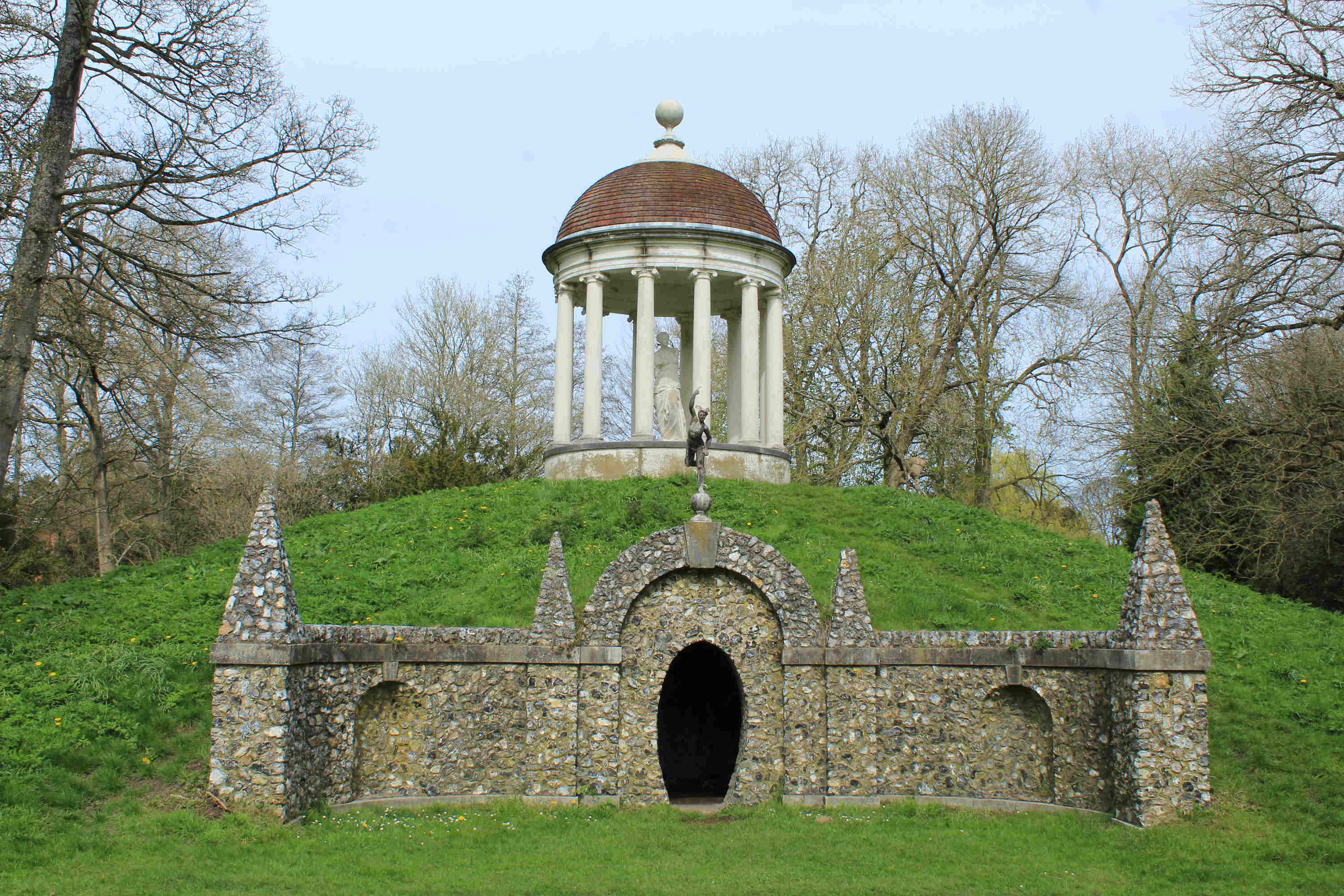 In 1750s, Dashwood introduced rococo elements into the garden. Light, frivolous and unexpected, winding paths and streams were created while the lake was expanded so that mock battles could take place. A Citadel was built – since destroyed – and a Cascade with rocks and a central figure of a River god. 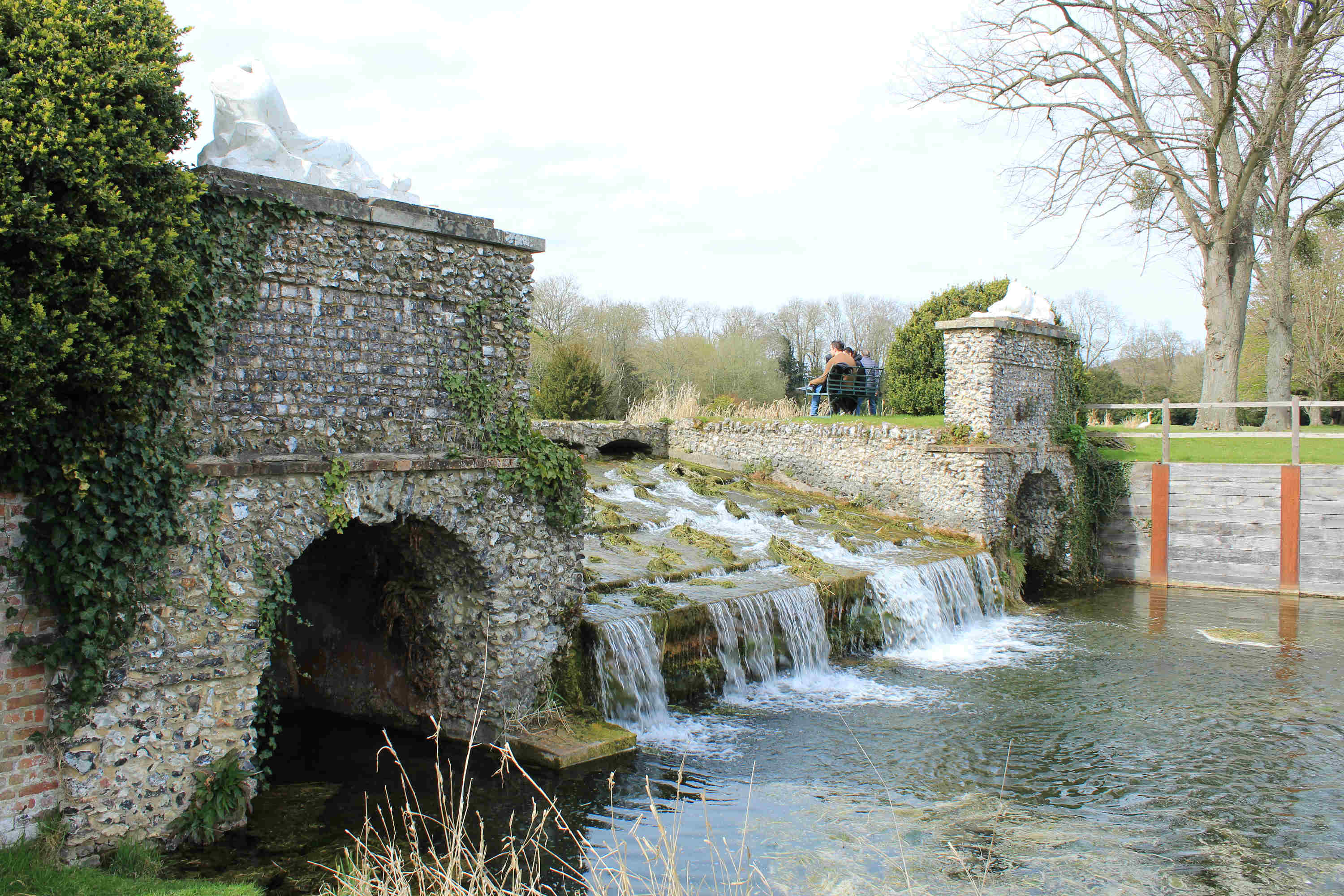 Simplified in 1770s, the two reclining nymphs on either side of the Cascade are paired with the lion and lioness in front of the Eastern Portico. With its Tuscan temple front, the Eastern Portico is an exact copy of the one at Mereworth. 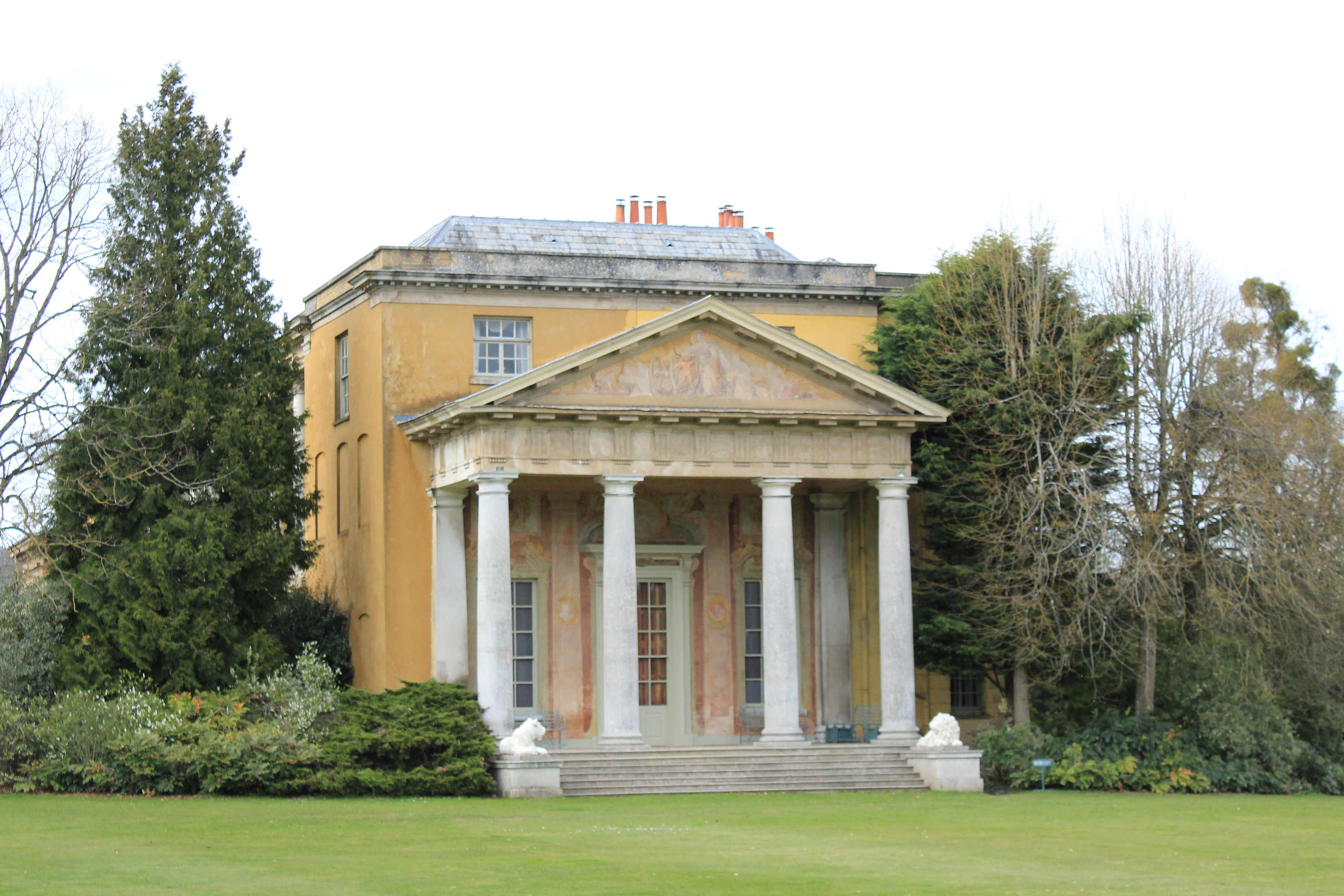 Temple of the Winds

Dating from 1759, the building was inspired by the classical Tower of the Winds in Athens. The flintwork below connects the building to the caves and Venus’s Parlour while there is a direct axial link with Kitty’s Lodge and Daphne’s Temple. 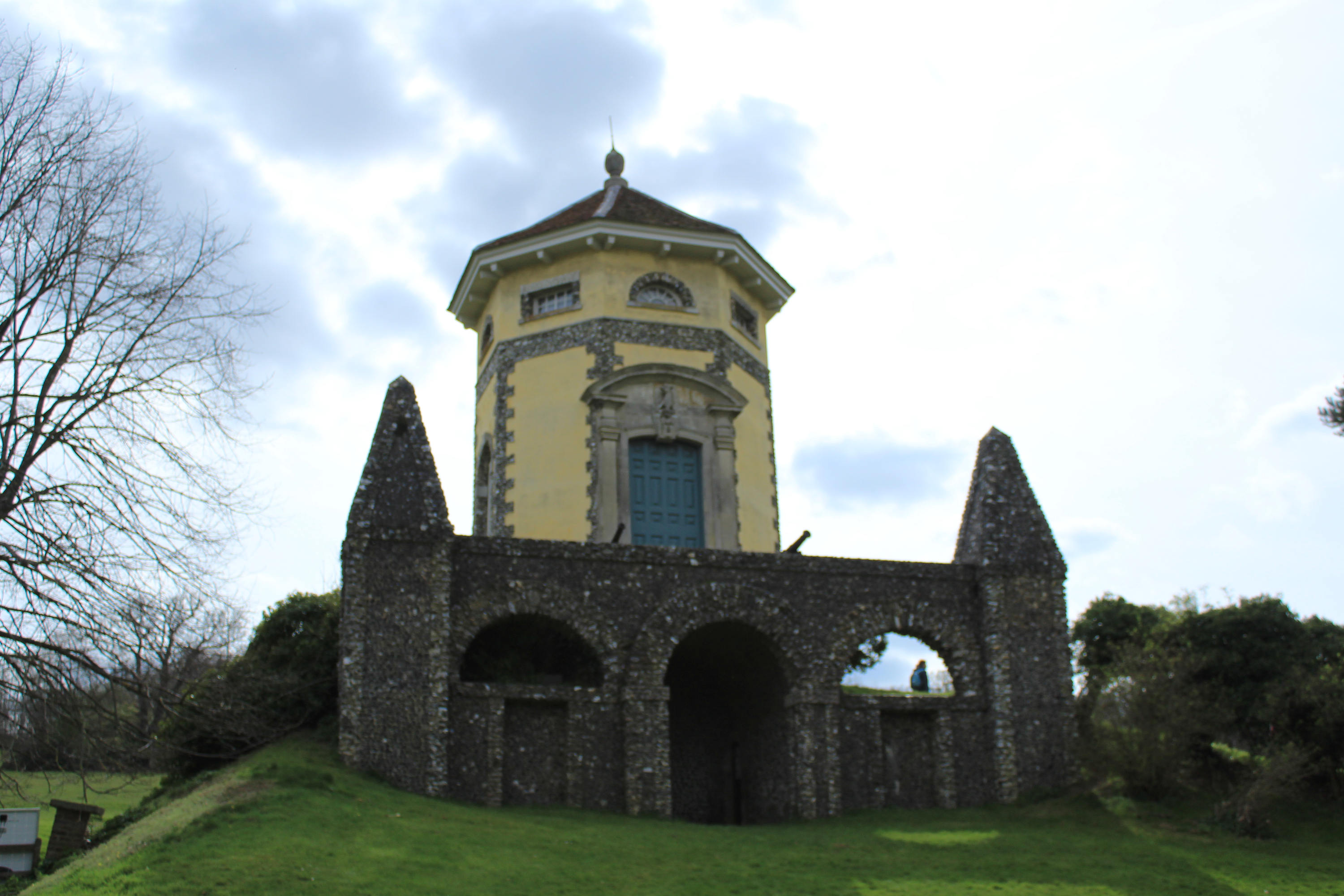 The Temple of Apollo

Built in 1761, the Temple has a panel over the arch inscribed ‘Libertati Amiticiae Sac’ (‘Sacred to Liberty and Friendship’). The motto is taken from Stowe – the Temples of Friendship and Liberty – but in typical Dashwood style, the inclusion is ironic. The building was used for cockfighting with an aviary above and a loo below. 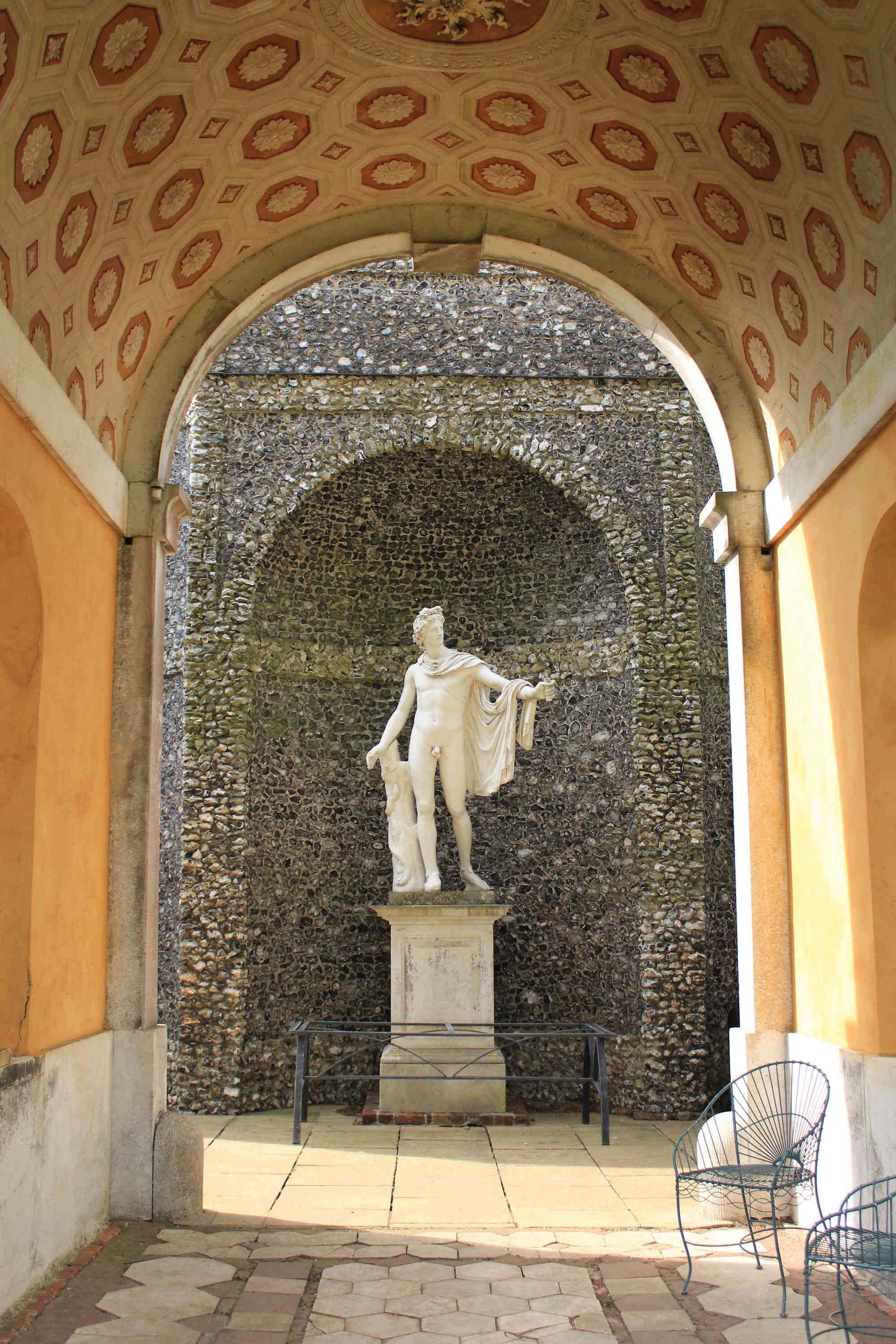 The Temple is both a garden building and the west entrance to the house. The grand opening of the building in September 1771, was recorded by Thomas Phillibrown in his Journal: ‘A Procession of Bacchanals, Priests, Priestesses, Pan, Fauns, Satyrs, Silenus etc. all in proper habits & skins wreathed with vine leaves, ivy, oak etc…having finished the sacrifice proceeded through the groves to a Tent pitched at the head of the lake where Paeans and libations were repeated’. 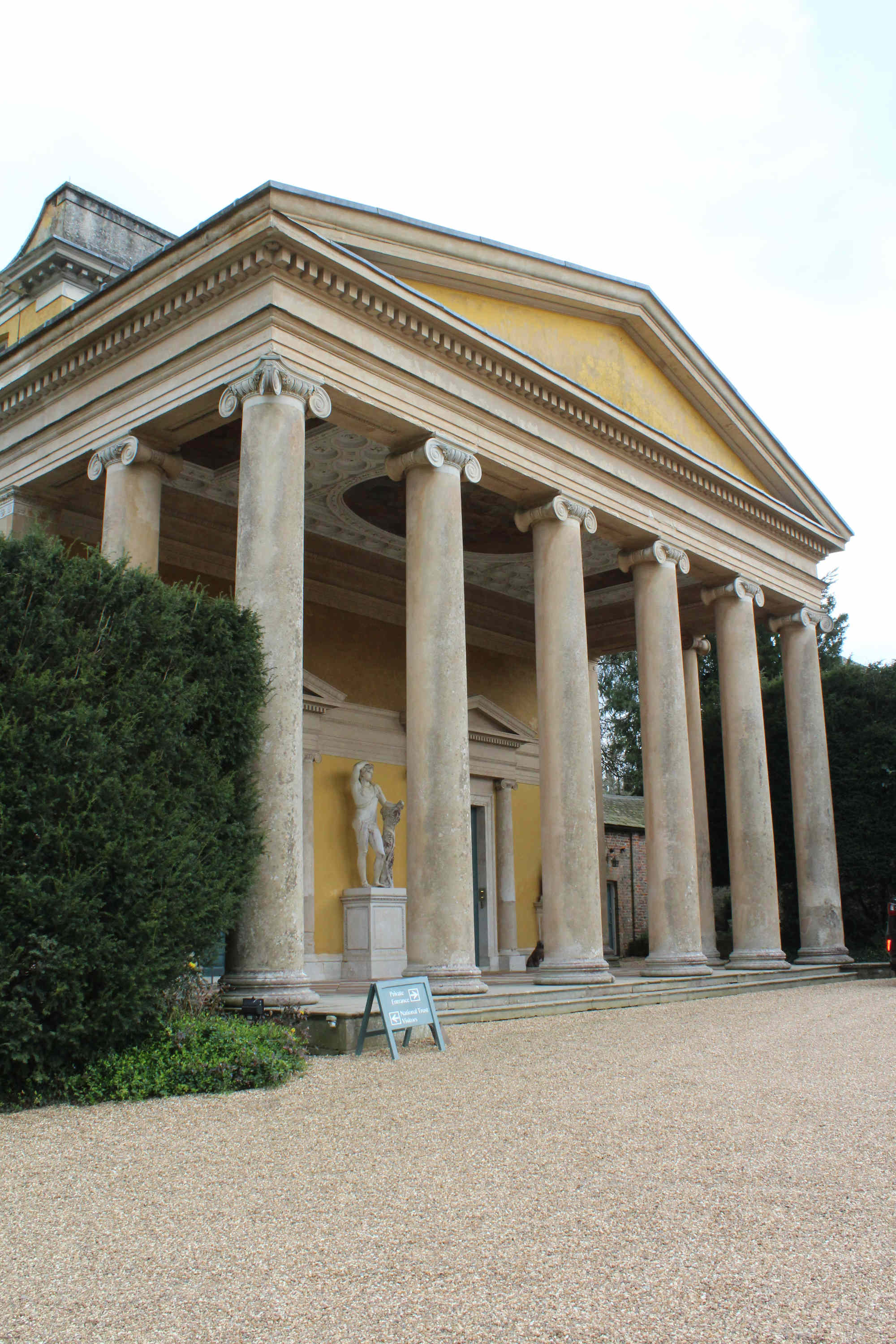 Nearby is the Temple of Diana, representing chastity. It is a very small building compared to the colossal Temple of Bacchus. 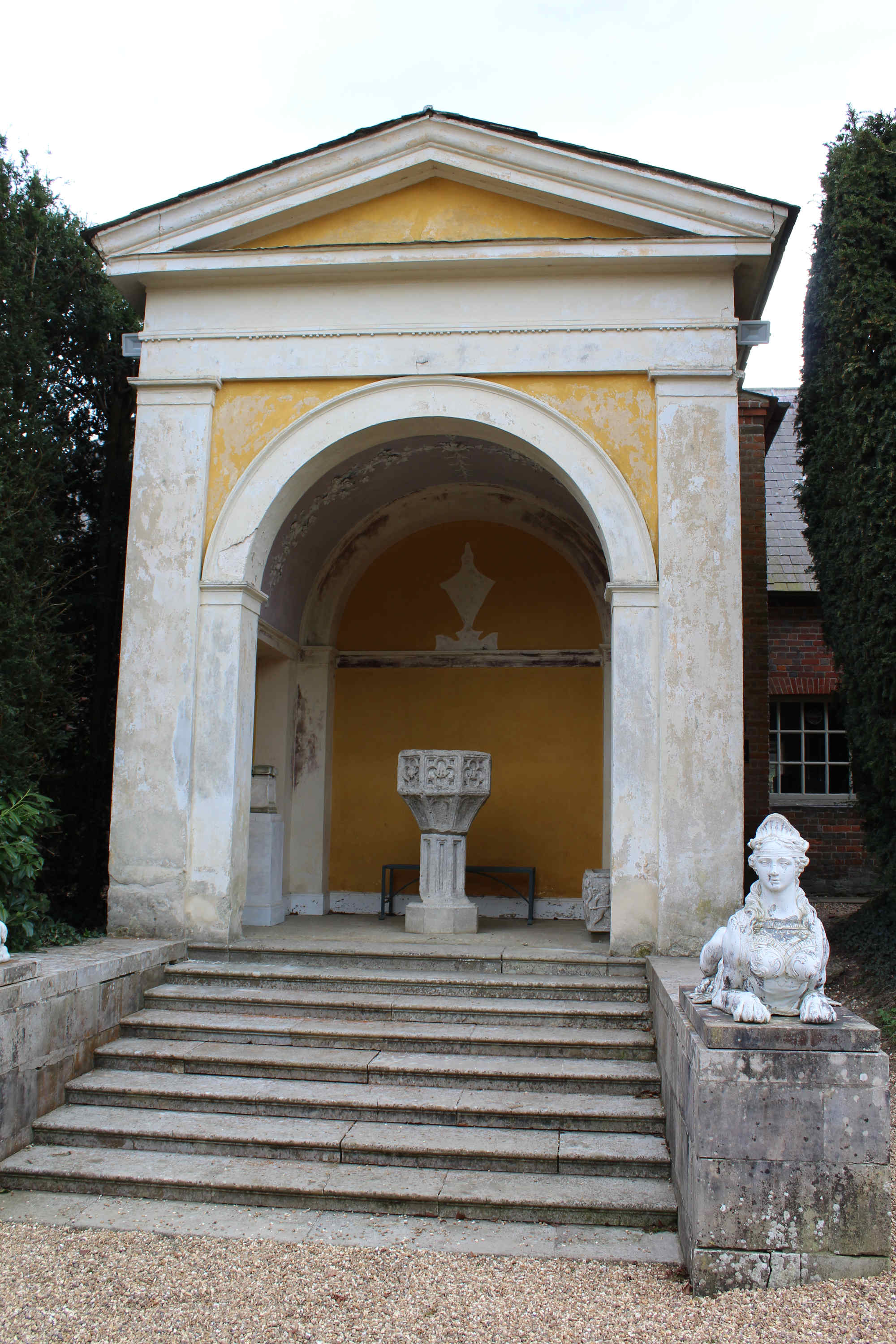 The Round Temple with its circular dovecote and curving colonnade is not what it claims – it’s a semi-circle. The other side of the Temple houses the water tank for the house. 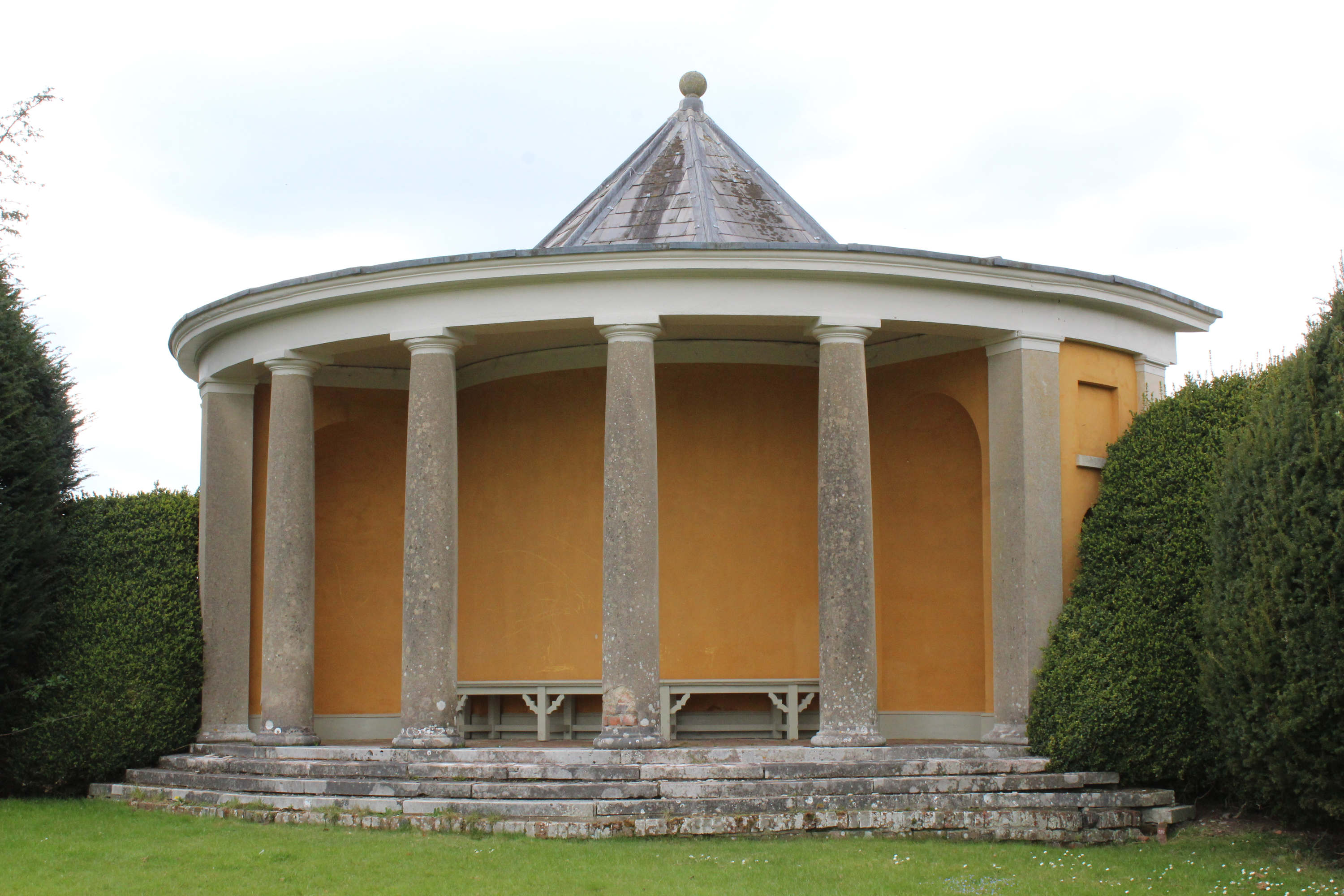 Used as a theatre, the Music Temple sits on an island in the lake and was one of the last buildings to be built. 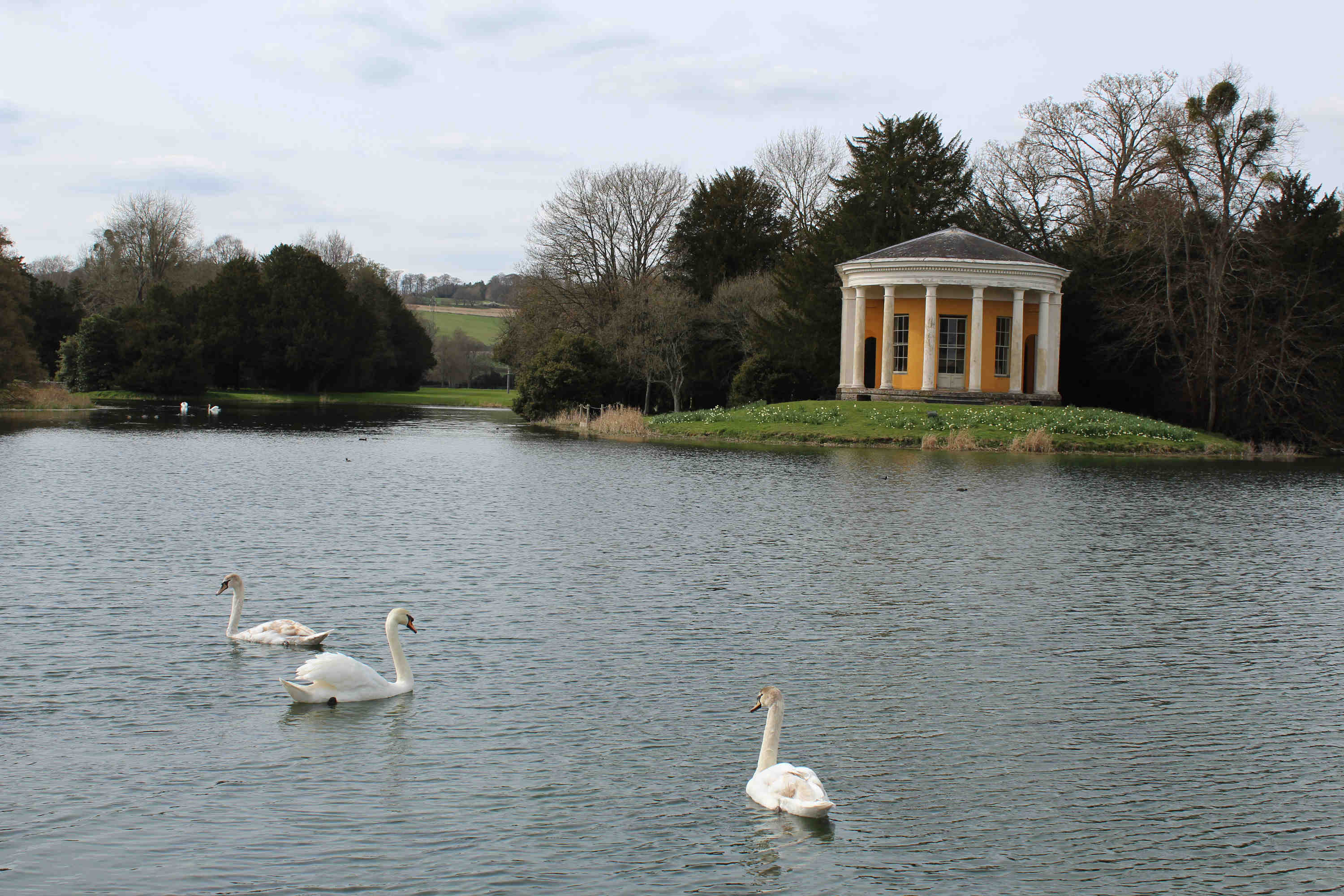 In 1770s, fashions changed again. Sir Francis invited Thomas Cook, a Brownian disciple to West Wycombe and some of the rococo elements disappeared or were modified. Cook was probably responsible for simplifying the Cascade removing the Citadel and replacing the Walton Bridge with a flintwork bridge. 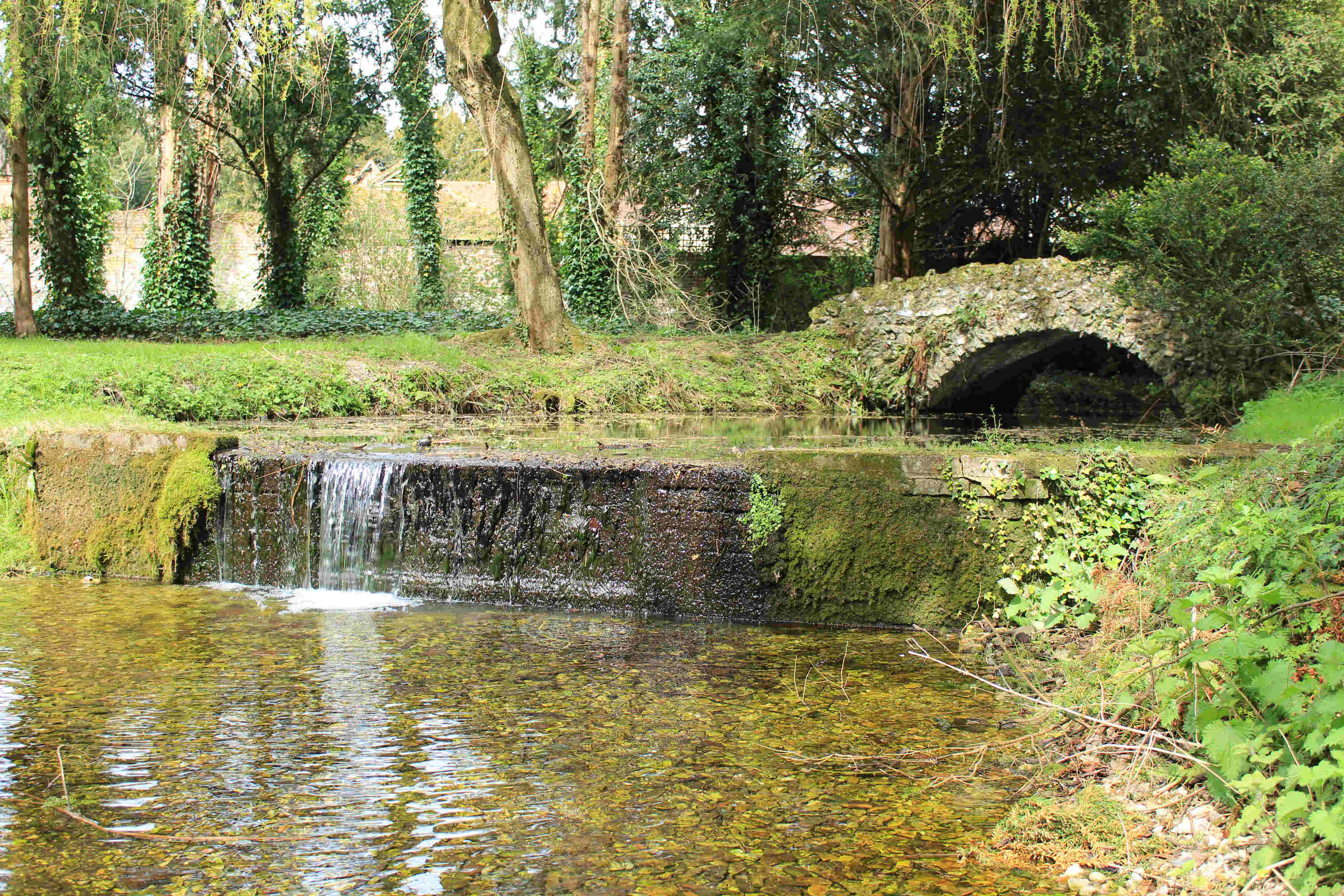 Having looked at Dashwood’s colourful life and wandered around the garden, it’s time to return to the Monks of Medmenham. Did the ‘friars’ worship the devil and take part in drunken orgies with prostitutes dressed as nuns? Every contemporary account I have read refers to the members dressing up as monks so this is probably true but there is no mention of the women wearing nuns’ habits, nor of them being paid. Instead, ‘lady[ies] of cheerful, lively disposition’, were invited by the members to Chapter Meetings and encouraged to wear masks so ‘not to have the embarrassment of unwittingly coming upon their husbands or acquaintances’. Drink was allowed with ‘no constraint with regard to the circulation of the glass’ but the women could retreat from the Meeting at any time. And there are no references to satanic rituals except for a practical joke played on the Earl of Sandwich. It seems there is less to the Monks of Medmenham than meets the eye.