EM Forster compared the tulips at Howard’s End to ‘a tray of jewels’ and I agree. Their wonderful colours from dark purple to green, to pink to white, striped or just one colour, I love them.

Over the last few weeks, I’ve been out and about searching for them. I love tulips in pots, in planned borders or as a cut flower but when they are clumped together by colour and then planted randomly in a bed? Not so much.

In this blog, I’ll discuss the history of the tulip and the different varieties – and dotted throughout are my photos of them. I can never have enough! 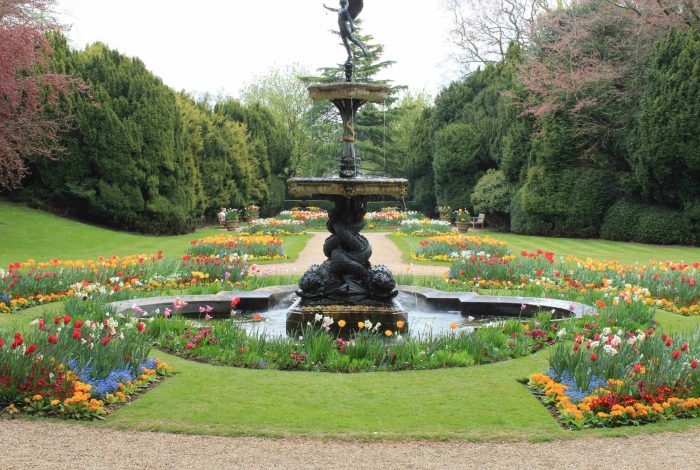 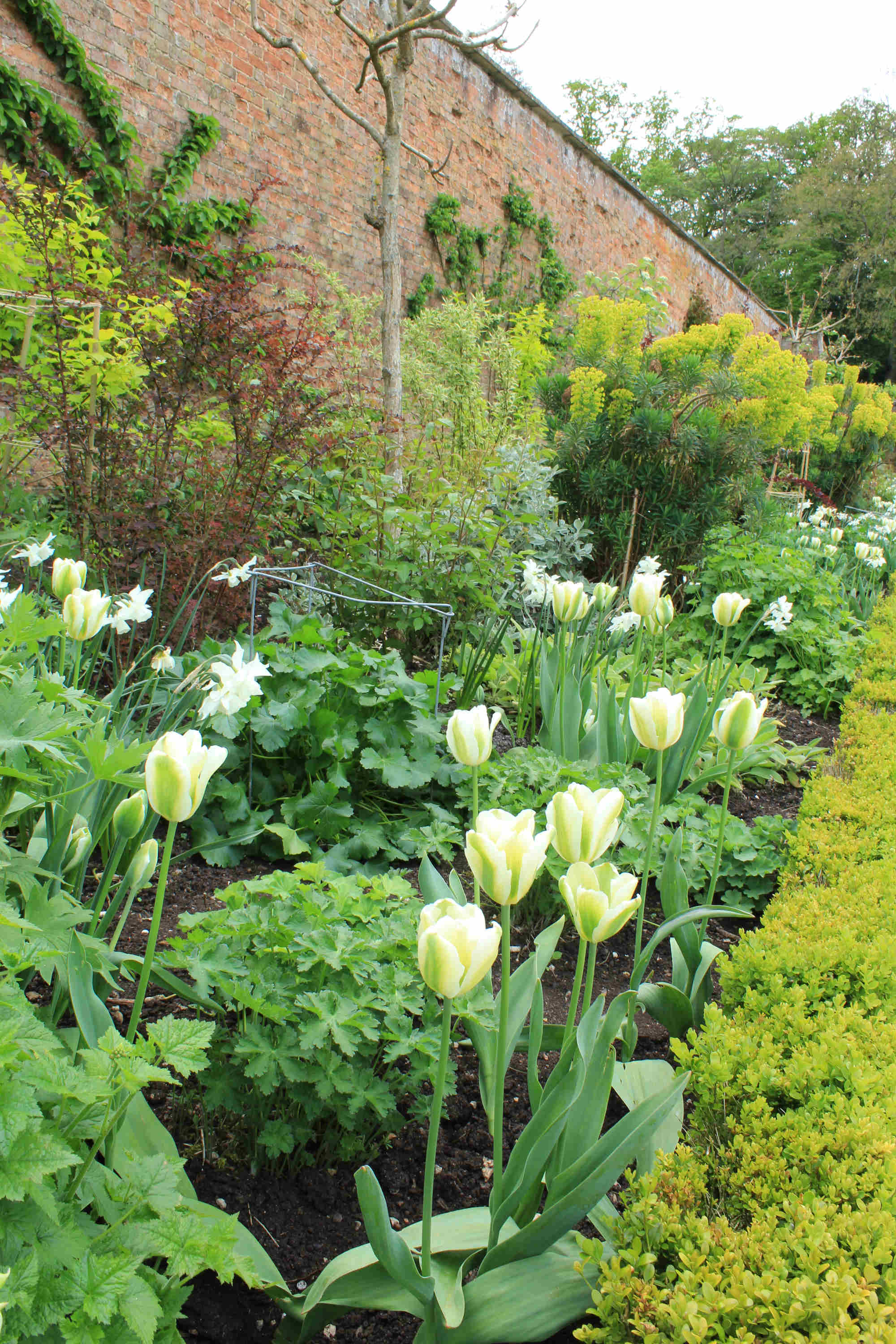 The History of the Tulip

Tulips were first cultivated by the Turks as early as 1055 having been found growing wild in Tien Shan Mountains of Central Asia. Originally living as nomads in a region extending from Central Asia to Siberia, the Turks had gradually moved west forming three powerful states – the Ottoman, Safavids and Mughal empires. Despite their differences, they had a shared interest in gardening. 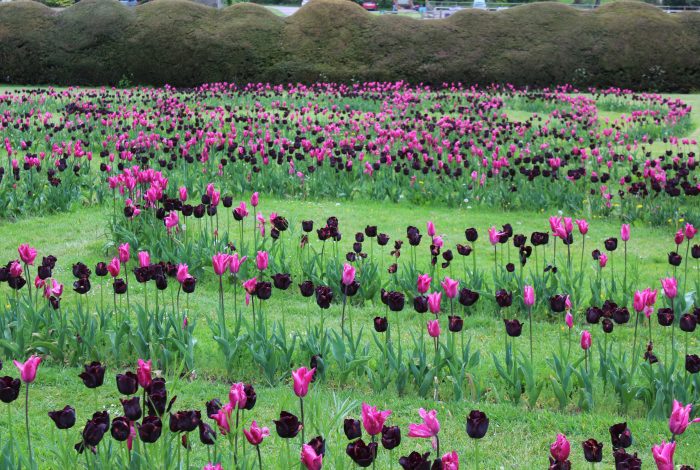 The founder of the Mughal Empire, Mohammed Babur (1483 – 1530) was both a warrior, writer, and a gardener. He visited the tulip fields around Samarkand and created gardens throughout Asia. In his autobiography, he lists his favourite trees and flowers including fruit trees, holm oak, willow, cypress, oleander, madder, rose, clover, jasmine, narcissus, violets and…tulips. 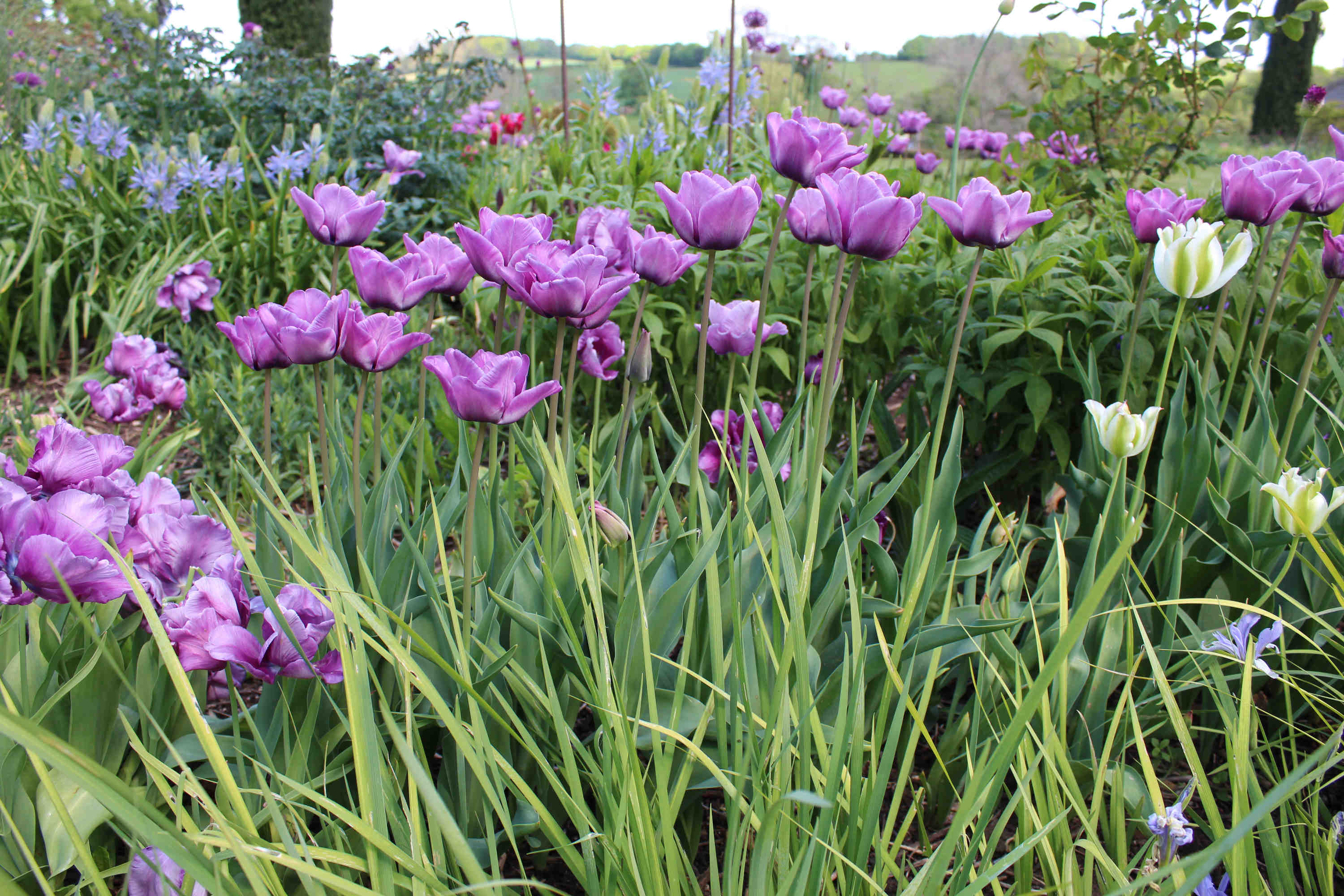 Many of the Sultans of the Ottoman Empire were also keen gardeners. Sultan Selim II (1524-1574) had twelve gardens with over 900 gardeners tending orchards, kitchen gardens as well as vast displays of tulips. According to some sources, the Sultan ordered 50k tulip bulbs from Aziz and 300k from Kefe for the Palace Garden at Constantinople. 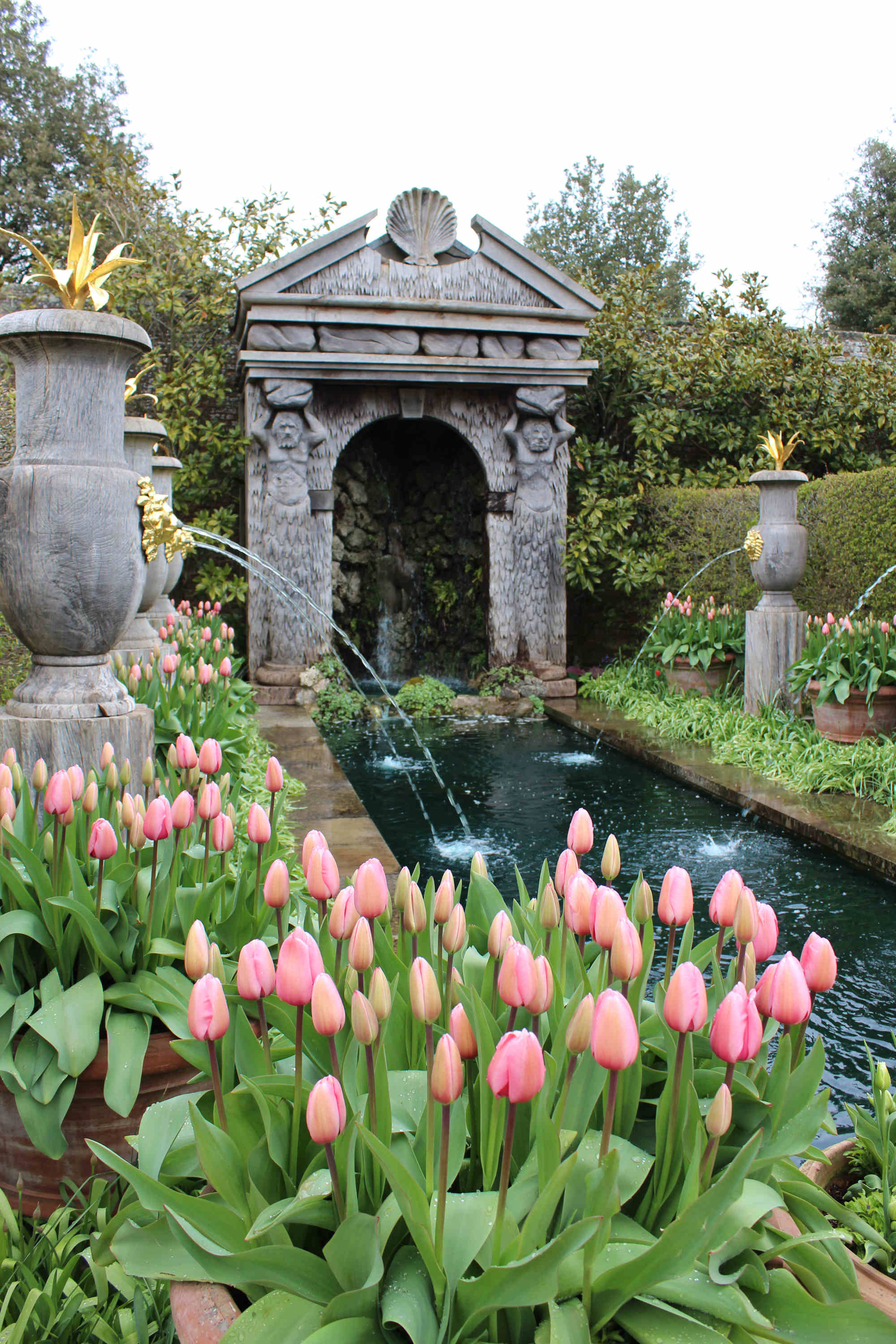 By the sixteenth century, tulips had become a symbol of the Ottoman Empire. Tulips were used in pottery, metal and textile design – Sultan Murad III (1546-1595) had tulips embroidered on his kaftan. 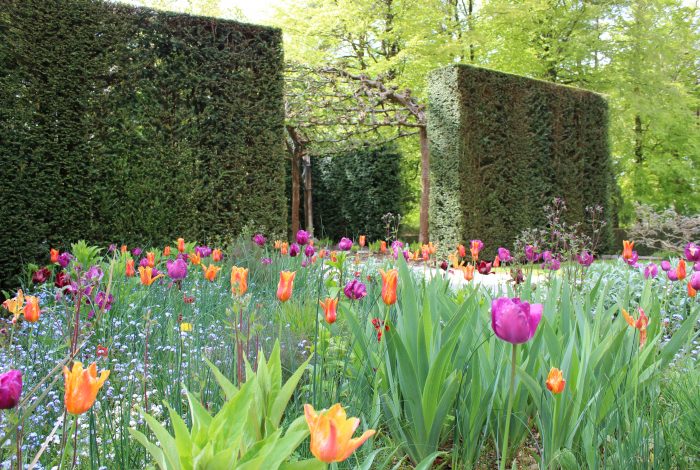 Mehmed IV (1648-1687) established a council of florists to examine and register new varieties of tulips but as the obsession grew, so did the price. Perhaps aware of the economic impact of Tulipmania in Holland, Sultan Ahmet III (1673-1736) imposed sanctions with the punishment of exile for anyone who was caught trying to sell a bulb at an inflated price. 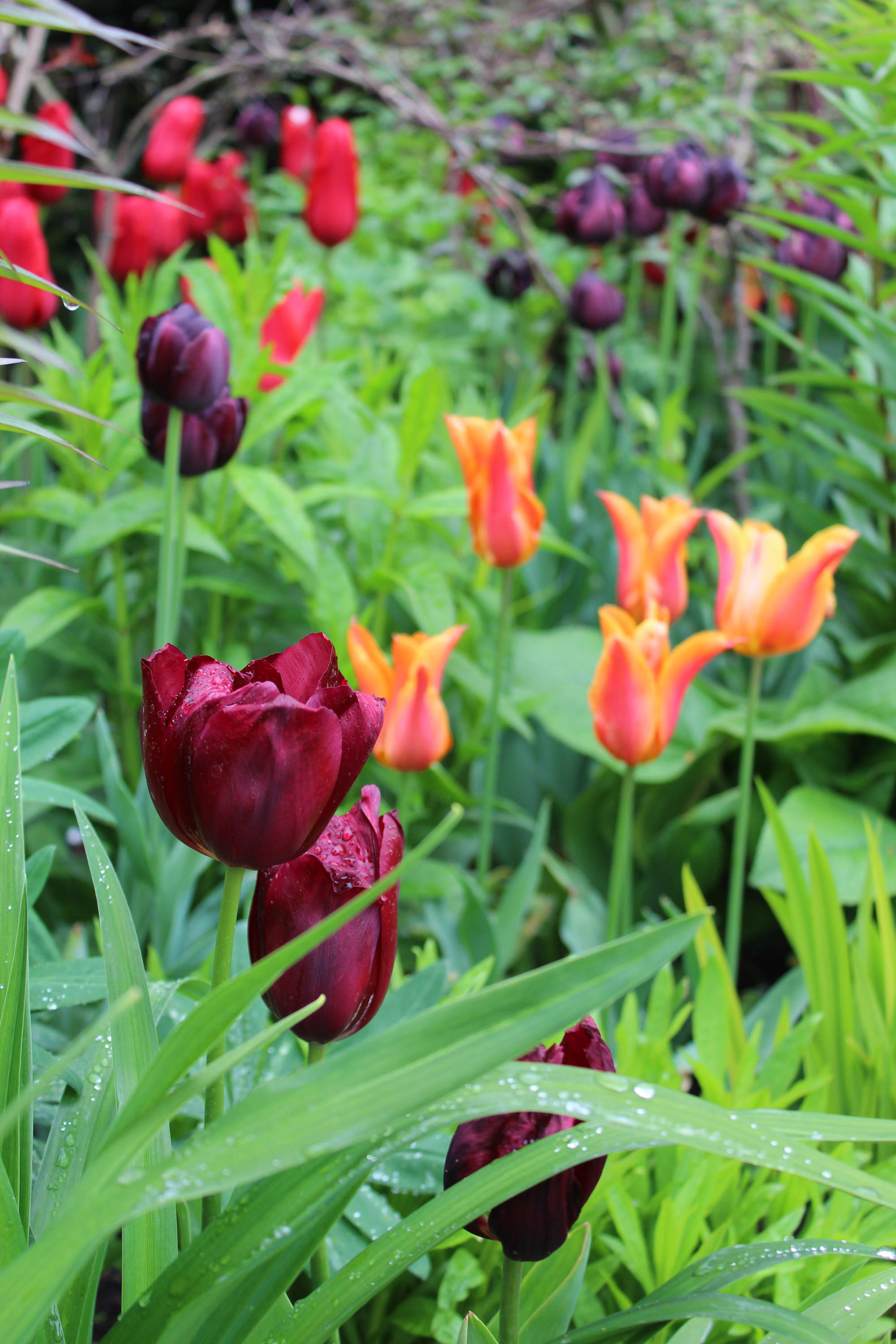 The period 1717 until 1730 became known as the Lale Devri or Tulip Era. Tulips were celebrated everywhere – they were painted, put in the folds of turbans, and placed singularly in vases known as laledan. Every April at the time of the full moon, Tulip Festivals were held over two consecutive nights. The first evening was for dignitaries dressed in mute colours so as not to clash with the tulips while the second night was solely for the Sultan’s harem. At one festival, the gardens were decorated with tulips in laledan placed between glass lanterns and globes filled with coloured liquids. Caged birds were hung from trees while tortoises with candles strapped to their backs, wandered among the flowers. It must have been a glorious sight. 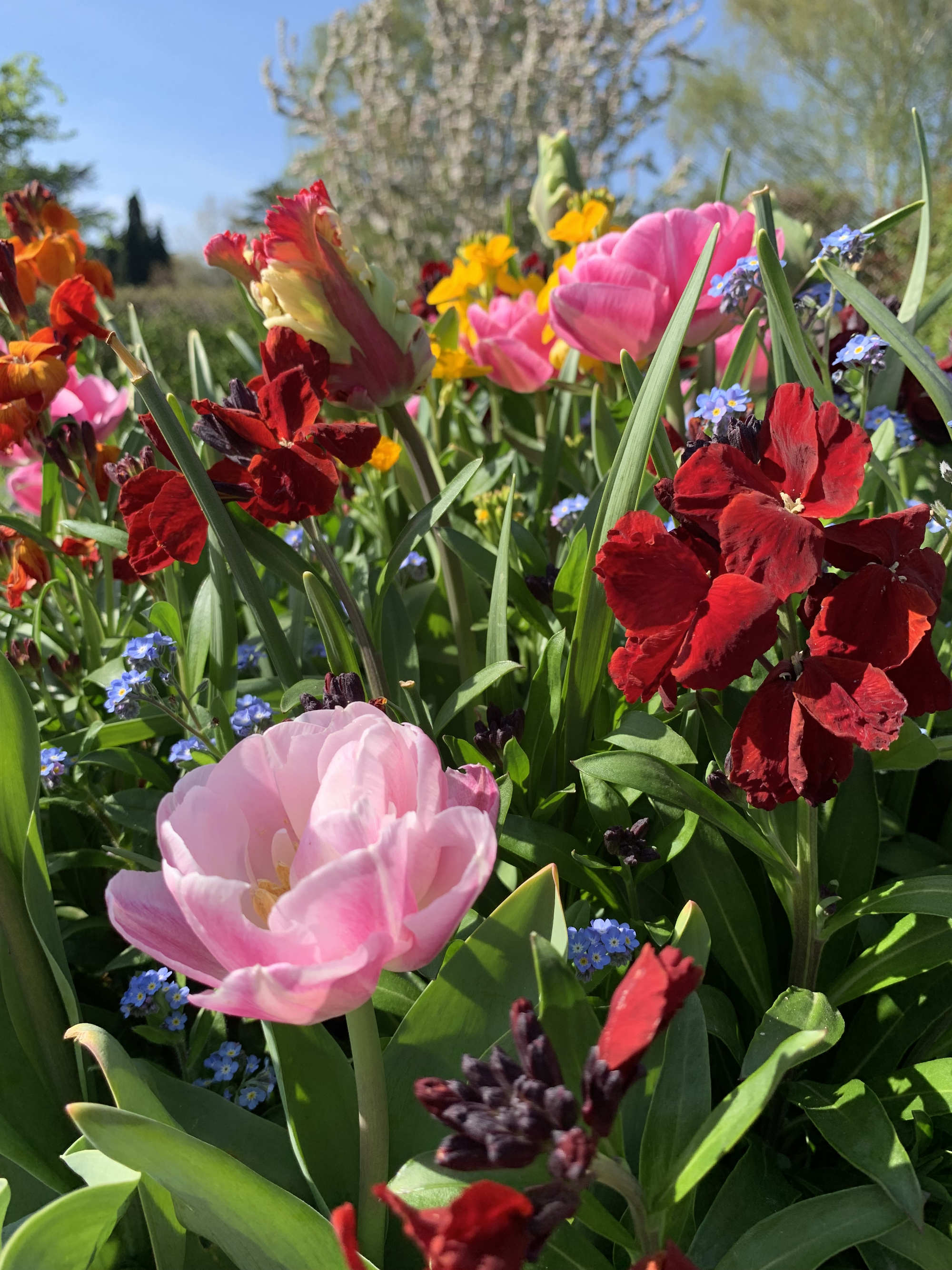 But in 1730, a rebellion broke out. The extravagance of the imperial court, its cultural leanings towards the west and the worsening economic climate, led to an uprising led by a former Janissary, Patrona Halil. Trying to save himself, the Sultan ordered his executioners (who were also his gardeners) to kill the ministers most closely allied to the unpopular policies but it was not enough, and Ahmet was forced to abdicate. The era of the tulip had come to an end. 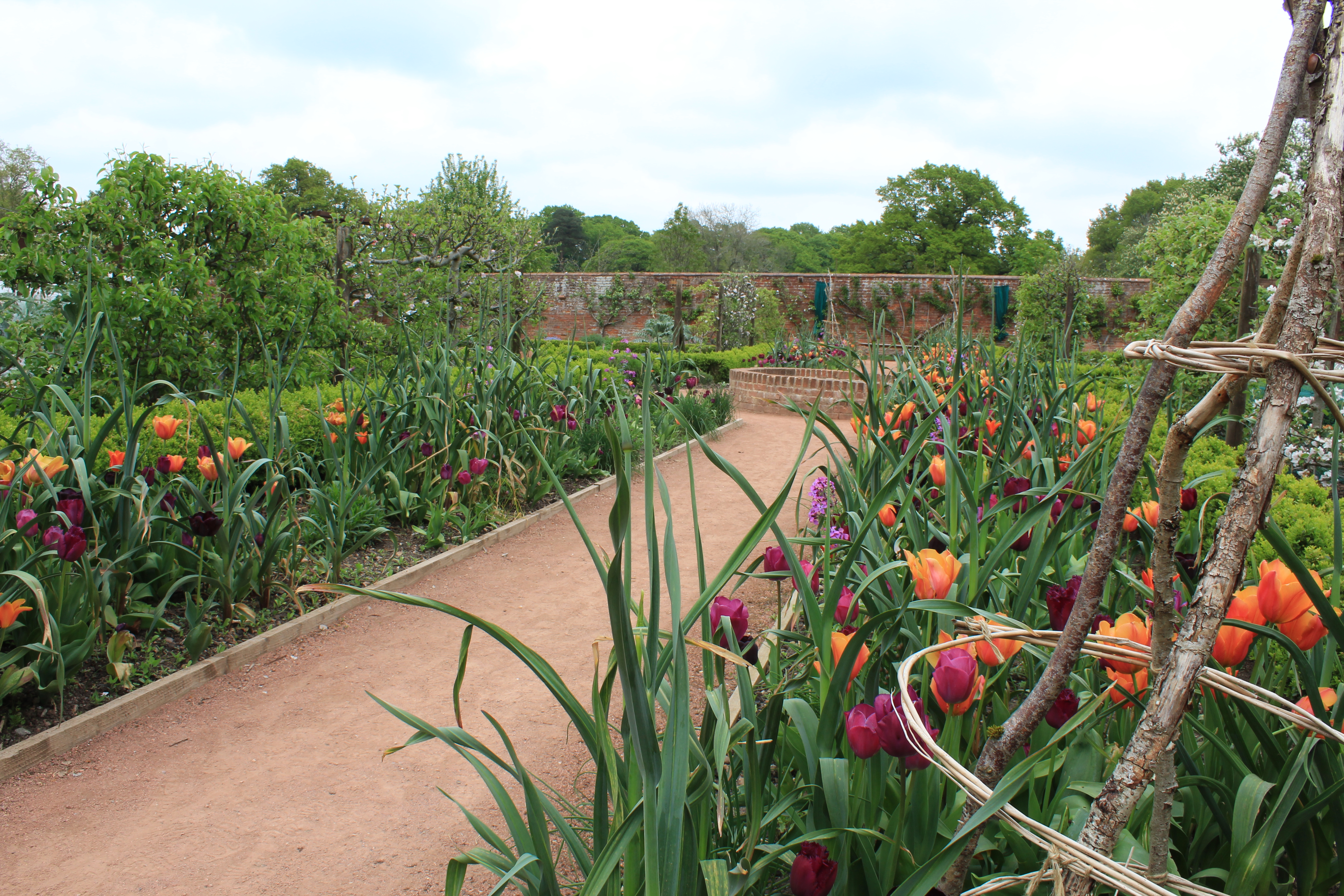 The Walled Garden at Packwood House, May 2022

Western Europe
The tulip was probably introduced to western Europe in the late 16th century by the Flemish herbalist and diplomat, Ogier Ghiselin de Busbecq. Ambassador to the Ottoman Empire, Busbecq sent tulip bulbs back to his friend, the botanist, Charles de l’Ecluse. In 1593, de l’Ecluse was appointed professor at the University of Leiden where he created one of the earliest botanical gardens of Europe. 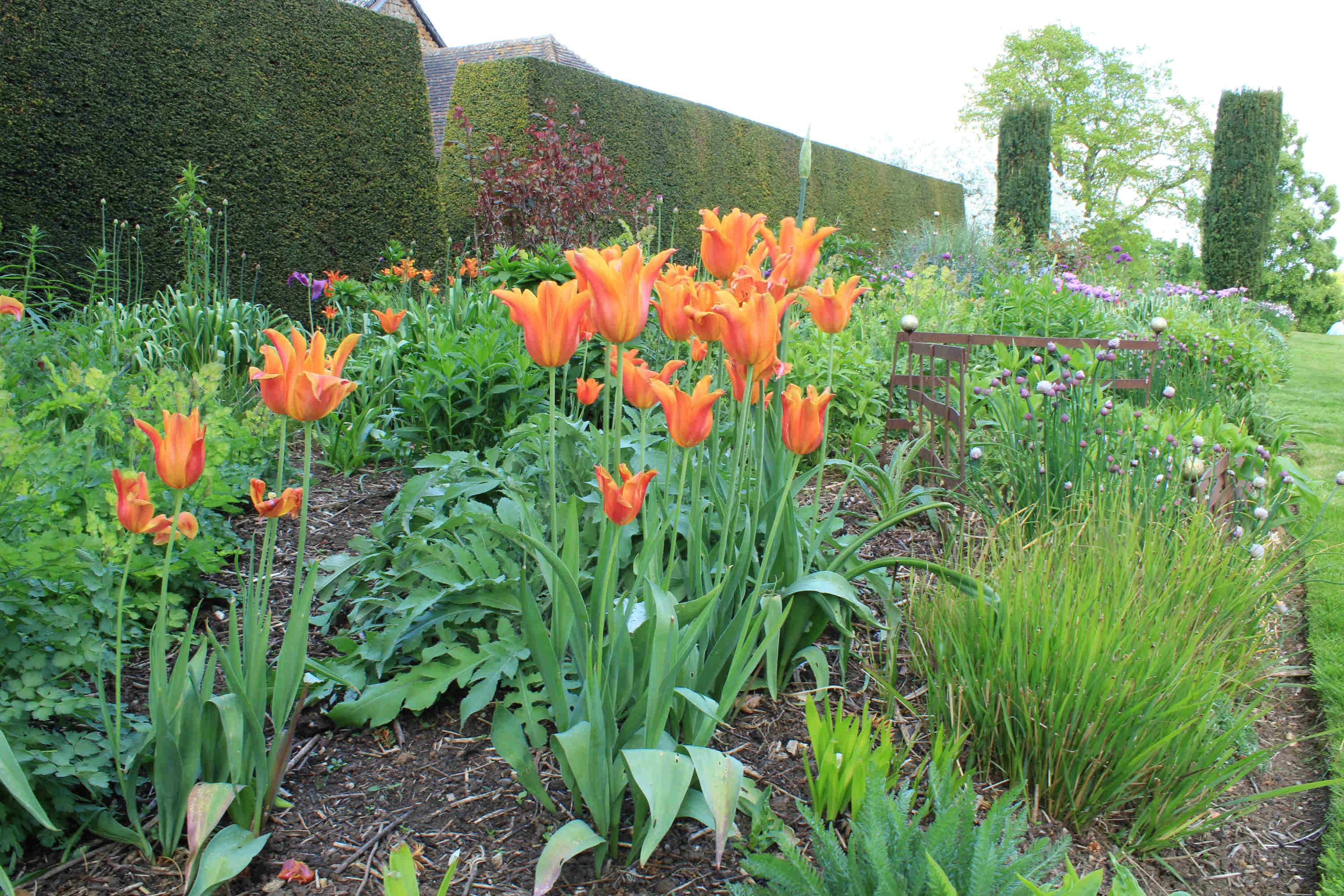 Created to imitate porcelain, the blue and white pottery known as Delftware, was being made in Delft by 1620. Elaborate vases and flower pyramids were made with Queen Mary, wife of William of Orange, a big fan. She ordered Delftware for her palaces at Honselaarsdijk and Het Loo and later at Hampton Court, the majority of which were made at the Greek ‘A’ Factory. 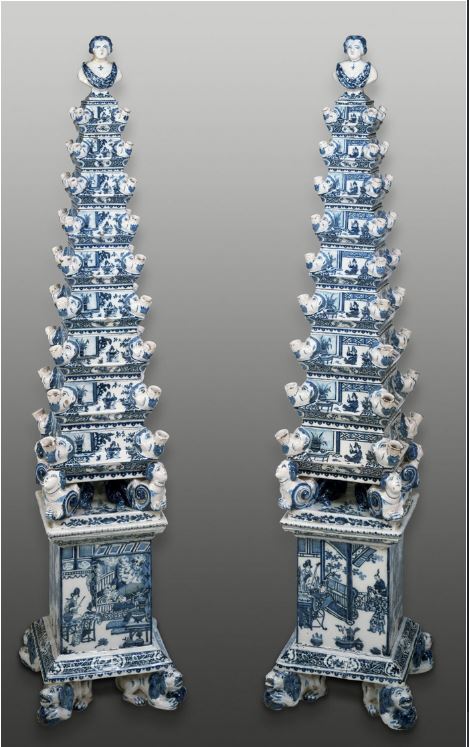 Flower Pyramid c1695. Made at Greek ‘A’ Factory. Copyright V&A

As tulips gained in popularity, botanists began to hybridize them with mutations seen as extremely desirable. The fashion reached its peak in January 1687, when a single Semper Augustus bulb sold for 10,000 guilders – the cost of a house in a fashionable part of Amsterdam. But the bubble burst and prices fell. In 1841, the Scottish journalist Charles MacKay gave an account of the crisis:

‘The tulip-jobbers speculated in the rise and fall of the tulip stocks, and made
large profits by buying when prices fell, and selling out when they rose. Many
individuals grew suddenly rich. A golden bait hung temptingly out before the
people, and one after the other, they rushed to the tulip-marts, like flies
around a honey-pot … Nobles, citizens, farmers, mechanics, sea-men,
footmen, maid-servants, even chimney-sweeps and old clothes-women, dabbled in tulips.’

But according to Anne Goldgar in Tulipmania: Money, Honor, and Knowledge in the Dutch Golden Age, 2007, the severity of the crash was exaggerated: ‘There weren’t that many people involved and the economic repercussions were pretty minor…I couldn’t find anybody that went bankrupt’. 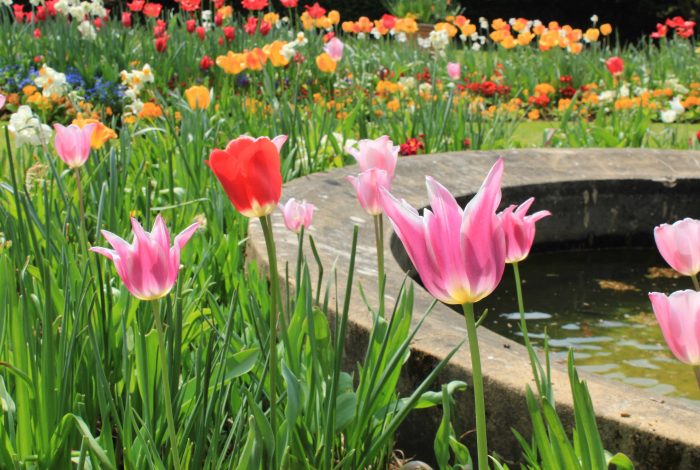 England imported tulips from Holland but as the fashion for parterres and flower borders waned at the beginning of the 18th century, bulbs were no longer needed for the more natural-looking landscapes. But the tulip did not disappear. At the beginning of the 19th century, ‘florists’ (cultivator of flowers) began growing them from seed and by 1830s, many towns, particularly in the north of England, had a specialist society for showing tulips. However by the 20th century, many of these societies had disbanded. 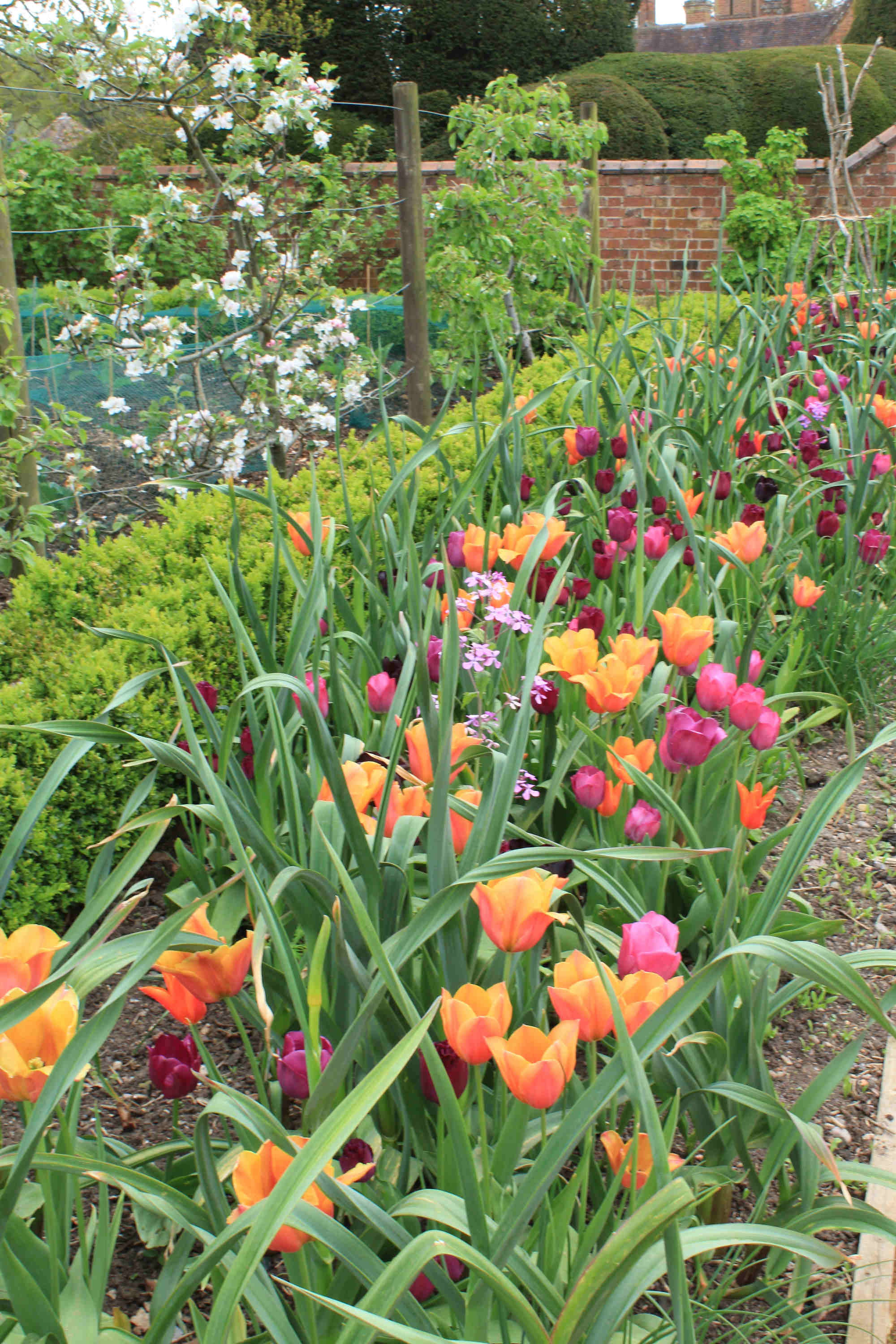 Walled Garden at Packwood House, May 2022

Did you know you can eat their petals? (Although please note that some people suffer allergic reactions to tulips, so proceed with caution).

You can add the petals to salads or boil them although they lose much of their colour when cooked. For a list of the best tulips to grow for eating, read Lucy Bellamy’s article in The Guardian.

There are over 3000 registered varieties of tulips which can be divided into 15 groups, mostly based on flower size, type and flowering period. 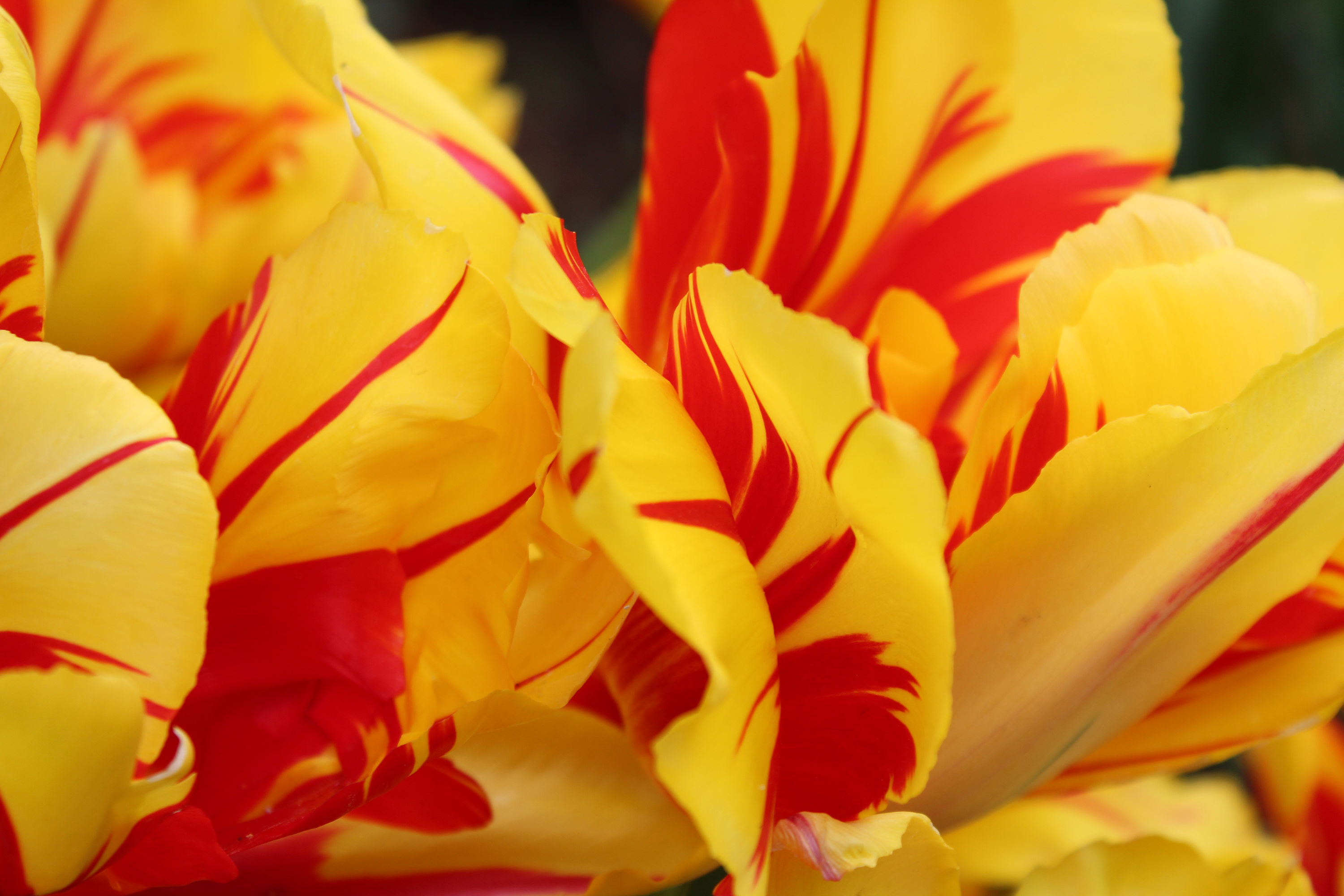 Triumph: single flowered cultivars, robust and flowering mid-season
Darwin: large, goblet shaped flowers on long stems. Flower mid-season, ideal for borders and are among the best for naturalizing
Single Late: cup or goblet-shaped flowers on long stems. Flower in May
Lily-Flowered: pointed petals that turn slightly back as they open, flowering in April/May
Viridiflora: late flowering with long lasting flowers with green streaks or markings 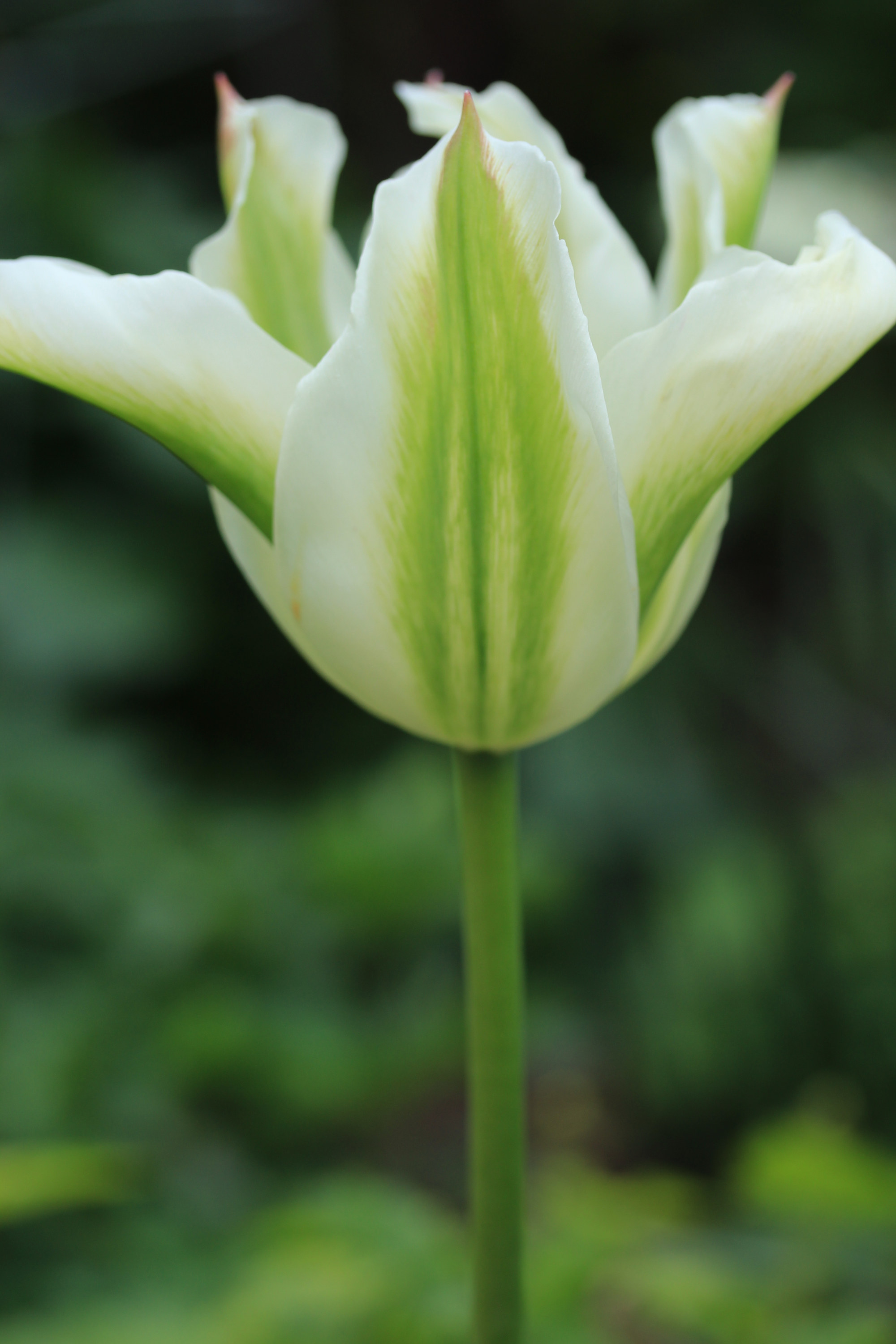 Rembrandt: broken flower colours created by non-spreading virus infection [It was discovered in 1930s that the ‘break’ or mutations in colour was caused by the mosaic virus, spreading from a louse living on peaches and potatoes.]
Parrot: late flowering with twisted, deeply frilled petals 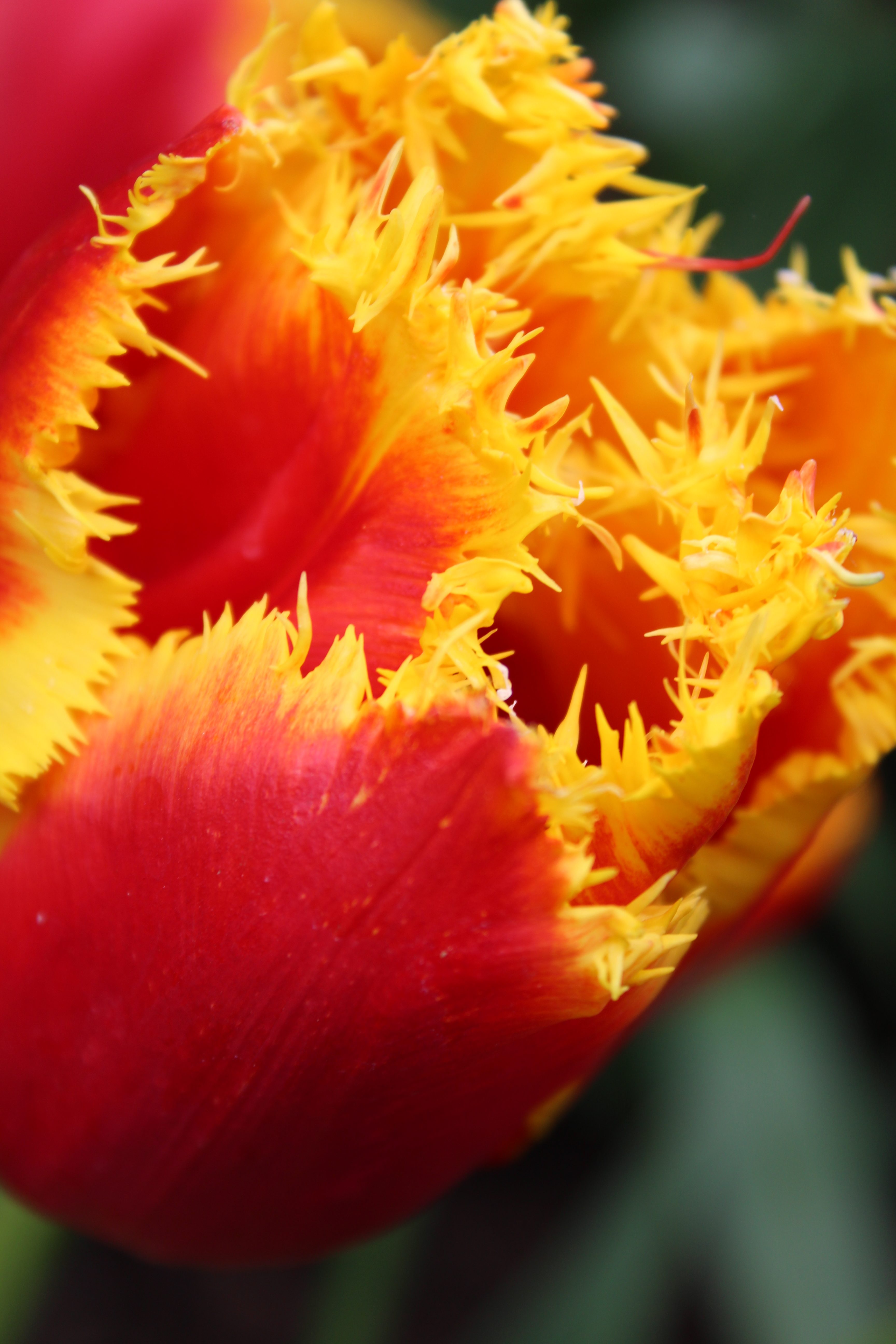 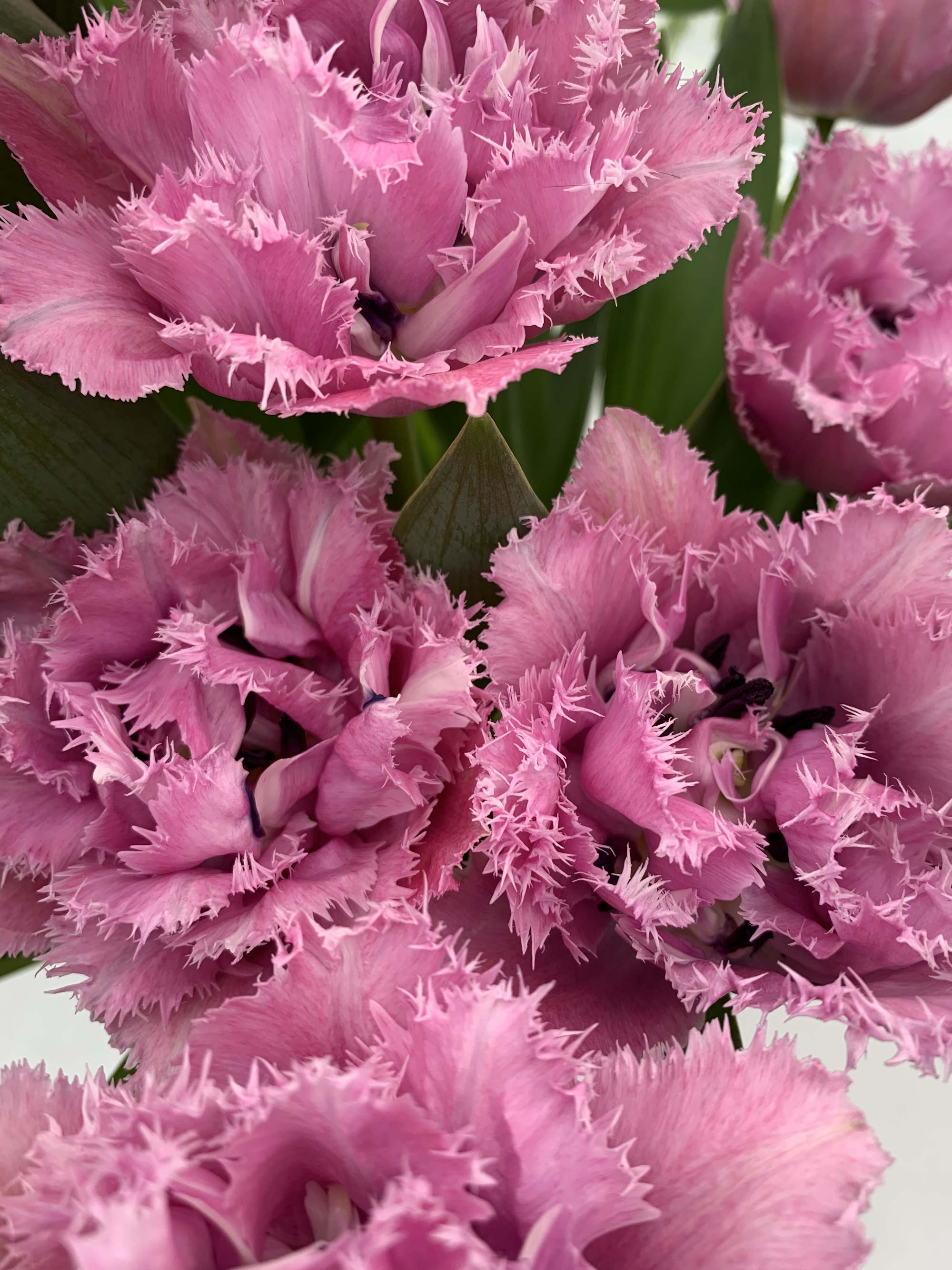